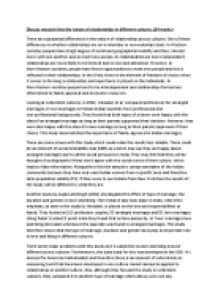 Discuss research into the nature of relationships in different cultures. (24 marks)

﻿Discuss research into the nature of relationships in different cultures. (24 marks) There are substantial differences in the nature of relationships across cultures. One of these differences is whether relationships are on a voluntary or non-voluntary basis. In Western societies people have a high degree of social and geographical mobility and thus, interact more with one another and so meet new people. As Individualists are more independent, relationships are more likely to be formed due to love and attraction. However, in Non-Western societies, people have fewer opportunities to meet new people and this is reflected in their relationships. In the West, there is the element of freedom of choice when it comes to forming a relationship and importance is placed on the individuals. In Non-Western societies people tend to be interdependent and relationships formed are often linked to family approval and economic resources. Looking at Collectivist cultures, in 1992, Umadevi et al. compared preferences for arranged marriages or love marriages in female Indian students from professional and non-professional backgrounds. They found that both types of women were happy with the idea of an arranged marriage as long as their parents supported their decision. ...read more.

This could affect the results because formation of relationships may have been different to how it was a few years back, for example internet dating in Collectivist cultures is becoming increasingly popular. Moving onto research in Individualist cultures, Zaidi and Shuraydi (200) investigated the attitudes towards arranged marriages in a group of second generation Pakistani, Muslin women who were brought up in Canada. 20 women, aged between 16-30 were interviewed. The results showed women preferred Westernised marriage practices, in which there was a greater amount of partner choice. However, there are some drawbacks as there is also an element of SDB in this study. As these women live in an Individualist culture they may feel they have to agree with the social norms of the country. Also it could also be prone to demand characteristics (DCs) as those who know a little about the nature of the research could potentially figure out the answers the researcher wants and will provide them with it. Moreover, the sample wasn?t representative as only 20 participants were used. Due to this the study lacks PV so the results may be unreliable and so can?t compare them with other studies. ...read more.

None of these psychologists belong to the area they have studied which increases the level of cultural bias in their findings. However, there is contradictory evidence to all these studies. The study carried out by Moore and Leung supports the evolutionary approach (EA) as there were little cultural differences in terms of people?s attitudes to love and romance. In conjunction with this study, Bartles and Zeki?s study also supports the EA. It provides evidence that our brains have evolved to make us feel love and romance. Additionally Janowiak and Fischer argued that love is still universal. They studied non Western tribal societies and found clear evidence of romantic love in 90% of the 166 cultures studies. This again supports the EA as despite of the fact that the reasons for marriage and exchanges within a relationship are different to those we find in Western culture, love is still present across all cultures. If the EA is correct, then one would expect the need for romantic love to be universal and not culturally driven. However there are more studies providing evidence for clear differences of romantic relationships across cultures. We have seen this in the variation of opinions of arranged marriages in Individualistic and Collectivist cultures. ...read more.