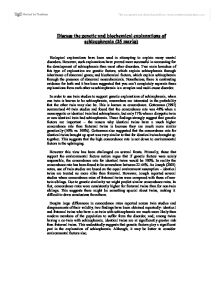 Discuss the genetic and biochemical explanations of schizophrenia

Despite large differences in concordance rates reported across twin studies and disagreements of their validity, two findings have been obtained repeatedly: identical and fraternal twins who have a co-twin with schizophrenia are much more likely than random members of the population to suffer from the disorder, and; among twins having a co-twin with schizophrenia, identical twins are at significantly greater risk than fraternal twins. This undoubtedly suggests that genetic factors play a significant part in the explanation of schizophrenia. Although, it may be better to consider environmental factors also. This can be seen in the study of adopted children. Tienari (1991) compared 155 adopted children who had a schizophrenic parent with 155 adopted children who did not have a schizophrenic parent. In all, 10.3% of those children with schizophrenic mothers developed the disorder, compared to only 1.1% of children without schizophrenic parent. Wahlberg et al. (1997) reported additional findings from this study, showing that environmental factors are also important. They found that children at genetic risk due to schizophrenic mothers had very good psychological health if raised by adopted families low in communication deviance (tendency to communicate in unclear and confusing ways). ...read more.

There is also more direct evidence based on post-mortem studies of schizophrenic patients. These showed that such patients had a greater density of dopamine receptors in certain parts of the brain than individuals not suffering from the disorder. There are, however, several problems relating to the dopamine hypothesis. Firstly, it is hard to assess brain levels of dopamine in patients with schizophrenia, this can only be done in a direct way by post-mortem assessment. It is also possible to assess dopamine in an indirect way. However this involves inserting a needle into the spine, which can be dangerous. The findings have generally been negative - patients with schizophrenia do not seem to produce more dopamine than other people. In conclusion, dopamine is probably of importance in understanding schizophrenia. However, it looks increasingly as if there are various complex differences in dopamine functioning between those with schizophrenia and healthy individuals. There is also the causality issue. If we find an association between having schizophrenia and having high levels of dopamine, the excessive dopamine levels might have played a part in causing the schizophrenia. However, it is also possible that elevated dopamine levels are in part a consequence of having schizophrenia. ...read more.