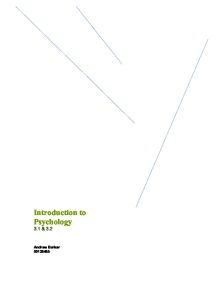 In psychology there are different methods of investigation, these would be observation, survey, clinical (case study), correlation and experimental methods.

and speak to the participant on the phone, on-line surveys which are focused on the participants experience and finally the home interviews, which is where the researchers go to the participants home and interview them. Advantages to this method are that it allows the researcher to get a lot of information in little time and that the surveys do not cost as much as other techniques. A disadvantage to this method would be that the choices of answers are limited and they may not reflect on the way that the participant truly feels. Researchers Hazan and Shaver made up a survey called the Love Quiz; this was to see if there was a connection between a child's attachment type and the romantic relationships they have later on in life. Their findings found that there was a connection between the two. Clinical Method (Case Study) This method is an in-depth study of one person or a small group. With this type of study, a lot of the participant's life is looked at to find patterns and reasons for behaviour. ...read more.

Experimental Method This method includes manipulating one variable to determine if changes in one variable can change another variable. It counts on controlled methods and the manipulation of variables to test a hypothesis. Some of the advantages to this method would be that it allows exact control of variables and the experiments are the only way that cause and effect can be established. Some disadvantages to this could be that where the experiments are in a laboratory, behaviour could be different to what it normally would be outside and the experiments most of the time involve lying to the participants in some way. Researcher Ivan Pavlov did a study on dogs. He found that the salivation in the dogs was a learned response. He decided to use food as an unconditioned stimulus and use the sound of a metronome as a natural stimulus. The dogs were made to listen to the sound of the metronome first and given food straight after. When this had been carried out a few times, Pavlov noticed that the dogs were beginning to salivate just from the sound of the metronome. He found that the metronome had become a conditioned stimulus that created a conditioned response being the dog's salivation. ...read more.