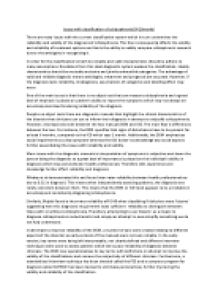 Issues with the Classification of Schizophrenia

﻿Issues with classification of schizophrenia (8+16marks) There are many issues with the current classification system which in turn undermines the reliability and validity of the diagnosis of schizophrenia. This then consequently affects the validity and reliability of treatment options and limits the ability to validly compare schizophrenic research due to the ambiguity in recognising it. In order for the classification to both be reliable and valid characteristics should be adhere to many assumptions. Deviations from this ideal diagnostic system weaken the classification. Ideally characteristics should be mutually exclusive and jointly exhaustible categories. The advantage of valid and reliable diagnosis means aetiologies, treatment and prognosis are accurate. However, if the diagnosis lacks reliability, misdiagnosis, assumptions of categories and labelling effect may occur. One of the main issues is that there is no object test that can measure schizophrenia and a great deal of emphasis is placed on patient?s ability to report the symptoms which may not always be accurately described hindering reliability of the diagnosis. ...read more.

Whaley et al demonstrated this and found inter-rater reliability between health professionals as low as 0.11 in diagnosis. This means when independently assessing patients, the diagnosis was rarely consistent between them. This means that the DSM or ICD tools appears to be unreliable in accurately and consistently diagnosing schizophrenia. Similarly, Mojabi found a inter-rater reliability off 0.40 when classifying if delusions were ?bizarre? suggesting even this diagnostic requirement lacks sufficient reliability to distinguish between those with or without schizophrenia. Therefore, attempting to use ?bizarre? as a means to diagnose schizophrenia is reductionistic and simply an attempt to over-simplify something we do not fully understand. In attempts to improve reliability of the DSM, a number of axis were created relating to different aspects of the disorder as early versions of the manuals were not very reliable. In the early version, key terms were being left interpretable, not clearly defined and different interview techniques were used to assess patients which led to poor reliability of diagnosis between clinicians. ...read more.

This makes data hard to compare based on individuals being diagnosed with different criteria and the differences in treatments if the diagnosis differs. Further cultural issues were identified in the USA by Cooper et al. He found a rise in diagnosis from 1930s compared to the 1950s, yet rates remained consistent in London. This is because the clinical criteria used in the USA was broader than the UK which makes us question the reliability of the diagnoses. In conclusion, it is confusing to have several alternative sets of diagnostic criteria, and emphasises the point that all definitions are susceptible to modification and influenced by the political and social contexts. Without this, like Boyle and Bentall suggested, the concept of schizophrenia is neither reliable nor valid and thus the diagnosis is not clinically or scientifically useful. The diagnosis is not valid nor reliable and therefore we need to try and make the current criteria more in line with the ideal criteria if it is to improve. ...read more.