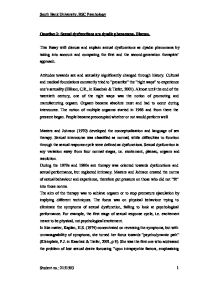 Question 2: Sexual dysfunctions are dyadic phenomena. Discuss. This Essay will discuss and explain sexual dysfunctions as dyadic phenomena by taking into account and comparing the first and the second-generation therapists' approach. Attitudes towards sex and sexuality significantly changed through history. Cultural and medical foundations constantly tried to "prescribe" the "right ways" to experience one's sexuality (Ellison, C.R., in Kaschak & Tiefer, 2001). Almost until the end of the twentieth century, one of the right ways was the notion of promoting and manufacturing orgasm. Orgasm became absolute must and had to occur during intercourse. The notion of multiple orgasms started in 1966 and from there the pressure began. People became preoccupied whether or not would perform well. Masters and Johnson (1970) developed the conceptualisation and language of sex therapy. Sexual intercourse was classified as normal, while difficulties to function through the sexual response cycle were defined as dysfunctions. Sexual dysfunction is any variation away from four normal stages, i.e. excitement, plateau, orgasm and resolution. During the 1970s and 1980s sex therapy was oriented towards dysfunctions and sexual performance, but neglected intimacy. Masters and Johnson created the norms of sexual behaviour and experience, therefore put pressure on those who did not "fit" into those norms. The aim of the therapy was to achieve orgasm or to stop premature ejaculation by implying different techniques. The focus was on physical behaviour trying to eliminate the symptoms of sexual dysfunction, failing to look at psychological performance. ...read more.

It is not about being emotionally dependant on your partner or your relationship, but about having a solid sense of self and therefore being able to invest yourself in your partner and your relationship without feeling of sacrificing. The goal of the therapy, according to Schnarch, is to promote differentiation and autonomy in the relationship, in order to develop sexual intimacy. Lobitz and Lobitz (1996) contributed to the treatment of Sexual Desire disorder with the notion of the Sexual Intimacy Paradox. The Sexual Intimacy Paradox takes place when couple's intimacy in their relationship increases, while consequently their sexual desire decreases (Lobitz & Lobitz, 1996). What actually influences sexual desire in a relationship is "distance, novelty, mystery, danger and power differences" (Kernberg, 1988 and Stallek, 1979, cited in Lobitz & Lobitz, 1996, p 72). If distance and novelty are some of the features which increase sexual desire, but one of the aims of sex therapy is to increase intimacy we are faced with and obvious paradox. Schnarch (2000) argues for differentiation, therefore partners should seek for validation and self-esteem in themselves, not from each other, while Lobitz and Lobitz (1996) model merges validation from oneself with validation from the other. Lobitz and Lobitz (1996) argue that people are able to self validate only if they receive validation. This developmental process enables people to feel secure about themselves and safe in their relationships. Moreover, they refer to intimacy "as process that occurs over time and is never completed or fully accomplished" (Lobitz & Lobitz, 1996, p 73). ...read more.

People should validate themselves instead of depending on others to validate them. Lobitz and Lobitz (1996) belong to the second generation of therapists and their model looks at dysfunction as dyadic phenomena, i.e. problem is in the relationship, not in the individual. Traditional sex therapy focuses on symptoms, manufacturing orgasm and "prescribing" treatments which are orientated towards sexual techniques and limited by time (Vandereycken, W., 1988). The firs generation therapists concentrated on physical behaviour trying to eliminate the symptoms of sexual dysfunction, failing to look at psychological performance, consequently creating performance anxiety for people who did not "fit" into sociocultural norms of sexual performance. The individualistic approach of the first generation sex therapist, positions the individual as a cause of the problem in the relationship, ignoring the fact that problem occurs within the relationship. The second generation of therapists took a different, away from individualistic approach, looking at the relationship itself, and dysfunction as dyadic phenomena. A problem was not anymore something that belongs to a client, but something that belongs to a couple. Schnarch (2000) argues for differentiation, therefore partners should seek for validation and self-esteem in themselves, not from each other, while Lobitz and Lobitz (1996) model merges validation from oneself with validation from the other. The second-generation therapists comparing with those of the first generation, achieved a significant success by employing their treatments, but it should be underlined that the treatment for sexual desire problems, i.e. sexual desire discrepancy as the most common complaint of couples that seek therapy, with regard to their nature and its pathology still lacks the knowledge. ...read more.