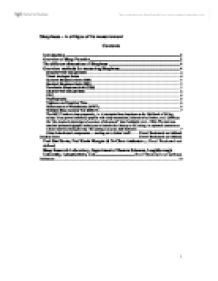 Sleepiness - A critique of its measurement

Sleepiness - A critique of its measurement Contents Introduction 2 Overview of Sleep Function 3 The different dimensions of Sleepiness 4 Overview: methods for measuring Sleepiness 5 SUBJECTIVE MEASURES 5 Visual Analogue Scales 5 Epworth Sleepiness Scale (ESS) 5 Stanford Sleepiness Scale (SSS) 6 Karolinska Sleepiness Scale (KSS) 6 OBJECTIVE MEASURES 6 EEG 6 Pupillography 6 Vigilance and Reaction Time 7 Maintenance of Wakefulness (MWT) 7 Multiple Sleep Latency Test (MSLT) 7 The MSLT looks at sleep propensity, i.e. it conceptualises sleepiness as the likelihood of falling asleep. It has proved extremely popular with sleep researchers, referred to by Roehrs, et al. (2000) as the "the standard physiological measure of sleepiness" (see Carskadon et al., 1986). The test uses standard polysomnographic techniques to measure the latency to fall asleep, on repeated measures at 2-hour intervals during the day. The setting is a quiet, dark bedroom. 7 Other behavioural components... moving on to Johns' stuff 8 Jonathan Scott 9 Prof Jim Horne, Prof Kevin Morgan & Dr Clare Anderson 9 Sleep Research Laboratory, Department of Human Sciences, Loughborough University, Leicestershire, U.K. 9 References 12 Introduction Sleepiness is certainly associated with such sleep disorders as sleep apnea and narcolepsy, but it is also a phenomenon that 'intrudes' into the waking state of 'healthy sleepers', who may or may not have experienced some loss to their normal daily quota of sleep in the preceding night(s). There is strong evidence that there is a high incidence of road accidents where sleepiness is the most likely cause (Horne & Reyner, 1995; Lyznicki et al., 1998), and, more broadly, that sleepiness has an important impact on general health (Dement & Mitler, 1993; Briones et al., 1996). There is however discordance over what exactly sleepiness is and how to measure it (Johns, 1998). These are issues of utmost importance. Clearly, to be able to successfully manage sleepiness, we need to have a sophisticated understanding of the phenomenon, and to do so, we need effective measurement tools. ...read more.

(2000) as the "the standard physiological measure of sleepiness" (see Carskadon et al., 1986) - a 'gold standard'. The test uses standard polysomnographic techniques to measure the latency to fall asleep, on repeated measures at 2-hour intervals during the day. The setting here again is a quiet, dark bedroom. The validity and reliability of this test are considered by some to be well established (see Carskadon, et al., 1986). More recently however the MSLT's gold standard status has come under considerable scrutiny (Kribbs, et al., 1994; Alexander et al., 1991; Bonnet & Arrand, 1998 & 2001). Johns wrote a report on the 'Failure of the MSLT as a gold standard' wherein he claims to provide evidence that the MSLT is less discriminating than both the MWT and the ESS (Johns, 2000). Rethinking some Interpretations: Function of Function The author now wishes to move on from methods to look more closely at some of the conclusions drawn in influential studies and theorise how it is that these results were interpreted in the context of the broader theories of sleep function. It will be proposed that some of these interpretations seem to be lacking in self-criticism and suffering from a monotheistic support of certain methods. This 'loyalty' to these methods will be presented as a smoke screen that clouds the researcher's ability to exercise empiricism. Looking back at Webb and Agnew's proposition that most of us are chronically sleep deprived, drawing on the eating and drinking analogy, their interpretation of their results can be seen to be the equivalent of trying to understand eating and drinking behaviour from the singular perspective of physiological need. According to Horne's Core-Optional hypothesis, only Chore sleepiness can be seen to be largely physiological. The more likely form of sleepiness is likely to consist largely of Optional sleepiness5, as this pertains to missing out on some of the latter stages of sleep, which are not essential. ...read more.