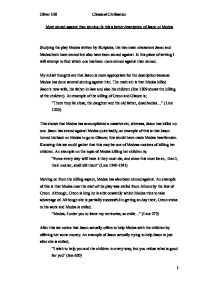 Studying the play Medea written by Euripides, the two main characters Jason and Medea both have sinned

More sinned against than sinning; Is this a better description of Jason or Medea Studying the play Medea written by Euripides, the two main characters Jason and Medea both have sinned but also have been sinned against. In this piece of writing I will attempt to find which one has been more sinned against than sinned. My initial thoughts are that Jason is more appropriate for the description because Medea has done several sinning against him. The main sin is that Medea killed Jason's new wife, his father-in-law and also his children (line 1309 shows the killing of the children). An example of the killing of Creon and Glauce is; "There they lie close, the daughter and the old father, dead bodies..." ...read more.

Although, Creon is king he is a bit cowardly which Medea tries to take advantage of. Although she is partially successful in getting an day their, Creon sticks to his work and Medea is exiled. "Medea, I order you to leave my territories, an exile..." (Line 272) After this we notice that Jason actually offers to help Medea with the children by offering her some money. An example of Jason actually trying to help Jason is just after she is exiled; "I wish to help you and the children in every way, but you refuse what is good for you" (line 620) Children are a major factor in Medea, they are known as silent characters throughout the play. ...read more.

Knowing this we can gather that maybe Jason only turned to Glauce as a way of securing a legitimate heir and that there is no love involved. Next, going back to the point of Medea getting exiled is that when she is cast from the city where can she go. We learn in the earlier part of the story that she killed her father and others just to be with Jason in Athens. In conclusion the description in mjy own opinion best suits Jason. This is because that although he has committed several sins he has also had many sins against him. On the other hand, Medea has caused many sins such as killing, but has little sins against her. Although there are a few. Oliver Hill Classical Civilisation 1 ...read more.