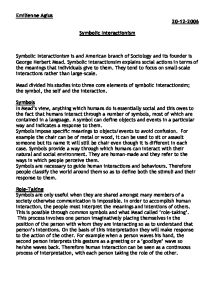 Emilienne Agius 20-12-2006 Symbolic Interactionism Symbolic Interactionism is and American branch of Sociology and its founder is George Herbert Mead. Symbolic interactionsim explains social actions in terms of the meanings that individuals give to them. They tend to focus on small-scale interactions rather than large-scale. Mead divided his studies into three core elements of symbolic interactionsim; the symbol, the self and the interaction. Symbols In Mead's view, anything which humans do is essentially social and this owes to the fact that humans interact through a number of symbols, most of which are contained in a language. A symbol can define objects and events in a particular way and indicates a response to them. Symbols impose specific meanings to objects/events to avoid confusion. For example the chair can be of metal or wood, it can be used to sit or assault someone but its name it will still be chair even though it is different in each case. Symbols provide a way through which humans can interact with their natural and social environment. They are human-made and they refer to the ways in which people perceive them. Symbols are necessary to guide human interactions and behaviours. ...read more.

However, the notion of 'self' isn't inborn but it is learned through two stages according to Mead. The 'play stage' involves children playing roles which are not their own. For example when children play 'police and thieves' they are taking the roles of two opposite people, they learn the differences between these two characters and they build a better idea of 'self' through this game of role-taking. The 'game stage' involves children seeing themselves from the perspective of others. For example when playing football they become aware of their relationship with the other players, and by placing themselves in the role of others they appreciate more their role in the game. They see themselves in terms of the collective viewpoint of the other players. To Mead, the process and development to learning 'self' is the basis for thought and action, the foundation for human society. Without the awareness of 'self' we wouldn't interact with others or take their role. Only by acquiring a concept of self can one take the role of self and thought, 'inner conversation', would be impossible without learning the self first. ...read more.

The Individual and Society Mead believes that humans are both creating a social environment and they are being shaped by it. Individuals control their own actions but at the same time they are influence by a society in general. The individual and society are one because individuals can only become human beings in a social context. In this context individuals create a sense of 'self', they learn to understand others' roles and to interact. Without the use of symbols and communication human interaction wouldn't be possible. Symbolic Interaction Criticism > Interactionists have focused on a small-scale-face-to-face interaction with little concern for its historical or social setting. Therefore, since these factors leading to interaction are so important, their omission in the study is considered serious because these influence have great influence on interaction. > Critics argue that interactionism stresses to much on the corrective (to the excess) social determinism. In stressing the flexibility and freedom of human action, interactionists tend to downplay the constraints on action. > Interactionists also fail to explain the origin or source of the symbols and meanings to which they give such importance. So when people engage in an interaction on the basis of presumed shared meanings, where do those shared meanings originate? ...read more.