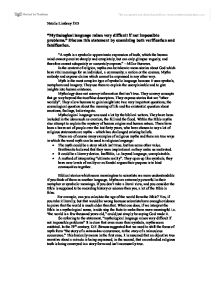 Mythological language raises very difficult if not impossible problems. Discuss this statement by examining both verification and falsification.

"Mythological language raises very difficult if not impossible problems." Discuss this statement by examining both verification and falsification. "A myth is a symbolic approximate expression of truth, which the human mind cannot perceive sharply and completely, but can only glimpse vaguely, and therefore cannot adequately or accurately express." - Millar Burrows. In the context of religion, myths can be taken to mean stories about God which have vital meanings for an individual, a community, a nation or the cosmos. Myths embody and express claims which cannot be expressed in any other way. Myth is the most complex type of symbolic language because it uses symbols, metaphors and imagery. They use them to explain the unexplainable and to give insights into human existence. Mythology does not convey information that isn't true. They convey concepts that go way beyond the true/false descriptors. They express stories that are "other worldly". They allow humans to gain insight into two very important questions; the cosmological question about the meaning of life and the existential question about emotions, feelings, believing etc. ...read more.

"the world is a few thousand years old," could just simply be saying God made it. So referring to the statement, "mythological language raises very difficult if not impossible problems" It is clear that even more than symbols, myths seem outdated. In the 19th century, D.F. Strauss suggested that we need to shift the focus of myth from "the story of a miraculous occurrence, to the story of a miraculous occurrence." This basically means in the first case, it is assumed that an objective true narrative about a miracle is being expressed, in the second, that an embodied religious truth is being conveyed in a story form and isn't necessarily true. Another critic of the use of mythological language was Rudolph Bultmann who said that we must not take myths literally. The Bible should be seen as a myth and only by reading the Bible as mythological text can we fully understand it. The Bible was written in a pre-scientific age when mythological language had a lot of meaning, i.e. ...read more.

He could also have added that this was put together during the course of many centuries. Significantly the difference between Bultmann and Dawkins is that Bultmann still maintained that there was truth to be extracted from the mythological narrative once the myth was stripped away. However, those who are in support of myth, claim that, since religious language is anti-realist, it is not concerned with making true or false statements. J.W. Rogerson wrote: "Because myths have their birth not in logic but in intuitions of transcendence, they are of value to traditions that seek to describe the action of the other worldly in the present world." So in conclusion, it is important to understand how myths should be interpreted rather than being concerned to establish what the facts of the matter actually are. We have to remember how these stories were heard, i.e. in the context of simple people. This was a language they could understand and images and pictures that related to ordinary readers and listeners to religious works. This allowed the underlying meanings to be absorbed without needing a great education. ?? ?? ?? ?? Natalie Limbrey 13D ...read more.