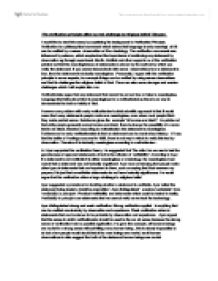 'The verification principle offers no real challenge to religious belief.' Discuss I would like to start this essay by explaining the background to Verification Principle. Verification is a philosophical movement which claims that language is only meaningful if it can be verified by a sense- observation or it is a tautology. The verification movement was influenced by science, which emphasized the importance of confirming any statement by observation eg through experiment. Moritz, Schlick and other supporters of the verification pointed out that the meaningfulness of statements is shown by the method by which you verify the statement. If you cannot demonstrate with sense-observations how a statement is true, then the statement is factually meaningless. Personally, I agree with the verification principle in some aspects, for example things can be verified by using sense observations and that its challenges the religious belief of God. There are also some stronger and weaker challenges which I will explain later on. Verificationists argue that any statement that cannot be proved true or false is meaningless. Language that talks about God is meaningless for a verificationist as there is no way to demonstrate the truth or falsity of God. However one problem with early verificationism's strict scientific approach is that it would mean that many statements people make are meaningless, even when most people think they make perfect sense. ...read more.

Swinburne refers to debates about the end of the world, the devil or Poseidon However if Ayer is correct, religious statements are nonsense if they are referring to God defined in a traditional sense as infinite, impersonal and transcendent because statements about God do not tell people anything about the world that is verifiable Ayer also rejected any argument from religious experience. He accepted that people might claim to have experiences of God, but he argues that a person, such as Paul who claim they have seen God is recounting a set of experiences raised interesting psychological questions, but because religious experiences are not verifiable Ayer rejected them as meaningful statements. However it is possible for something to be meaningful but unverifiable. It is quite possible for a statement to be meaningful without being verifiable. Swinburne gives the example of toys in a cupboard. The toys only come out at night when no one observes them. The situation is meaningful even though it is fictitious and unverifiable. Schrodinger suggested that you can imagine a cat in a box with a radioactive particle that would kill the cat. Is the cat dead or alive- you cannot know. If you open the box to find out, you may trigger the release of the radioactive particle, thus killing the cat. ...read more.

Anthony Flew's example of the explorer in the garden was inspired by a similar story by John Wisdom. However Wisdom uses his story to make a different point to Flew. Wisdom's story about a garden suggested that 2 people were looking at an overgrown garden. One of the observers how uncared it is, but there are signs of order like flowers and suggests a gardener. However no test can show whether there was a gardener. It suggests that religious language makes statements that are reasonable. Just as they cannot verify whether a gardener has been at work, the existence or nature of God might be beyond our normal methods of verification. Therefore the nature of God is a matter that is outside the scope of traditional methods of scientific enquiry. In conclusion the principles of verification and falsification both present strong challenges to religious belief. However, they are not the only ways in which to assess religious language, and for many believers the language they use to talk about God is symbolic, mythological or just different from other language. Therefore, believers might claim that the principles of falsification and verification are not relevant challenges to religious language as the nature of religious language is different from that supposed in the verification and falsification debates. ?? ?? ?? ?? ...read more.