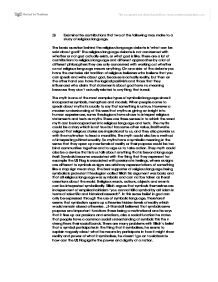 (i) Examine the contributions that two of the following may make to a study of religious language. The basic question behind the religious language debate is 'what can be said about god?' The religious language debate is not concerned with whether or not god actually exists, or what god is like. There are a lot of contributions to religious language and different approaches by a lot of different philosophers they are only concerned with working out whether or not religious language means anything. On one side of the debate you have the centuries old tradition of religious believers who believe that you can speak and write about god, because is actually reality, but then on the other hand you have the logical positivists and those that they influenced who claim that statements about god have no meaning because they don't actually related to anything that is real. The myth is one of the most complex types of symbolic language since it incorporates symbols, metaphors and models. When people come to speak about myths its usually to say that something is untrue. However a modern understanding of this sees that myths as giving an insight into human experiences, some theologians have chose to interpret religious statements and texts as myths. ...read more.

He explains that a word such as 'perfect' when applied to a created being has a different meaning to when it is applied to God; it is not being used univocally. This is because we understand God to be perfect which is what Aquinas explains to be analogy. This is contrasted to Tillich's starting point as he explains that it is through metaphors and symbols. Aquinas rejects the use of univocal and equivocal language to talk about God; instead he uses analogy which is basically a comparison between two things in which the first simpler thing is used to explain the second more complex thing which is in some way similar. This means analogy relies on the fact there is some point of comparison which links the two things. Analogy can be used to describe God because he is revealed through Creation meaning there is some point of comparison between God and the world, as most believe that god was the creator of the world. There is then analogy of attribution which means words such as just and good may be applied to God as well as human beings. ...read more.

For Stevenson, ethical statements are based upon firm, justifiable beliefs about the world and the way in which it should work, and therefore are meaningful. We disapprove of the Holocaust murders not just because they are not to our taste but because we have firm, justifiable beliefs about human dignity and worth. Although Flew provoked a debate by stating that religious language is only meaningful in so far as it can be falsified. What he meant by this is that often religious statements are qualified to the point that they lose their meaning. Another way of expressing this could be by saying that when people make religious assertions they add the rider 'yes but... .' this seemed unsatisfactory to Flew a d he concluded that 'to assert something is to deny something else. An assertion which does not rules out anything, but rather is compatible with an conceivable state of affairs, does not disappear to assert anything either' Although there are a lot of arguments towards the fact that religious language is meaningful and they also give relevant debates towards this which also seem to make sense towards religious language and talking about god and whether it is meaningful or not and it depends on which stance people take on this topic to which argument they may prefer. ...read more.