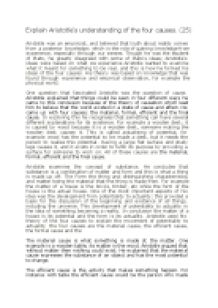 ﻿Explain Aristotle?s understanding of the four causes. (25) Aristotle was an empiricist, and believed that truth about reality comes from a posterior knowledge; which is the role of gaining knowledge from experience, especially through our senses. Though he was the student of Plato, he greatly disagreed with some of Plato's ideas; Aristotle's ideas were based on what we experience Aristotle wanted to examine what it meant for something to be real, and this is how he formed his ideas of the four causes. His theory was based on knowledge that was found through experience and empirical observation, for example the physical world. One question that fascinated Aristotle was the question of cause. Aristotle explained that things could be seen in four different ways he came to this conclusion because of the theory of causation which lead him to believe that the world existed in a state of cause and effect. ...read more.

All of these causes are the material, formal, efficient and the final cause. Aristotle examines the concept of substance. He concludes that substance is a combination of matter and form and this is what a thing is made up off. The Form the thing and distinguishing characteristics, and matter being the material that the thing is made from. For example the matter of a house is the bricks, timber, etc while the form of the house is the actual house. One of the most important aspects of his idea was the development from potentiality to actuality; this provided a basis for the discussion of the beginning and existence of all things, including the universe. This development of potentiality to actuality is the idea of something becoming a reality. ...read more.

Aristotle believed that the efficient cause is where potentiality is turn to actuality, the person sees the potential of the wood and actualises it by making it into a wooden table. The formal cause is the form of which something is in. For example the wooden table is the way it is because it is in the form of a wooden table. That something allows it to be identified as a wooden table. Aristotle explained that something has its own form opposed to sharing in the ideal form. The final cause is the goal or telos of a thing, the reason for its existence in the first place (e.g to allow someone to used the surface is the final purpose). This is the most important aspect of Aristotle?s thinking. This shows that his thought is consistently teleological as everything is always moving or changing and has a telos ...read more.