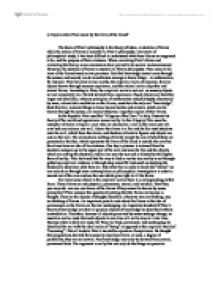 Explain what Plato meant by the Form of the Good?

a) Explain what Plato meant by the Form of the Good? The basis of Plato's philosophy is his theory of Ideas, or doctrine of Forms while the notion of Forms is essential to Plato's philosophy, over years of philosophical study, it has been difficult to understand what these Forms are supposed to be, and the purpose of their existence. When examining Plato's forms and evaluating the theory, some conclusions have proved to be unclear and unanswered. However, the doctrine of Forms is essential to Plato's philosophy. Plato came to his view of the Forms based on two premises: first that knowledge cannot come through the senses; and second, we do nevertheless manage to know things - in mathematics, for instance. Plato believed in two worlds; the empirical realm of concrete, familiar objects known through sensory experience, and the rational realm of perfect and eternal Forms. According to Plato, the empirical realm is not real, as sensory objects are not completely real. Beliefs derived from experience of such objects are therefore vague and unreliable, whereas principles of mathematics and philosophy, discovered by inner, rationalistic meditation on the Forms, constitute the only real "knowledge". Such familiar, concrete things as trees, human bodies and animals, which can be known through the senses, are merely shadowy, imperfect copies of their Forms. In the Republic Plato used the "Allegory of the Cave." to help illustrate his theory of the world and appearance versus reality. In the Allegory Plato uses the metaphor of slaves living in a cave who are chained to a wall in the lower part of a cave and can only see one wall. ...read more.

In Plato's Republic, the sun in the Allegory of the Cave represents the Form of the Good. Plato sums up his views in an image of ignorant humanity, trapped in the depths of a cave and not even aware of its own limited perspective. They mistake shadows on the walls of the cave as true reality, when in fact reality lies in the world outside of the cave, the world of Forms. The rare individual escapes the limitations of that cave and, through a long intellectual journey, discovers a higher realm, a true reality, and the sunlight on the other side of the cave. The sunlight is discovered with a final, almost mystical awareness of Goodness as the origin of everything that exists. Such a person is then the best equipped to govern in society, having a knowledge of what is ultimately most worthwhile in life and not just a knowledge of techniques; but that person will frequently be misunderstood by those ordinary people back in the cave who haven't shared in the intellectual insight. Ideally, it is the philosopher who is able to penetrate the world outside the cave of ignorance and achieve the true reality of the world of Forms. Also the word "Good" when used by Plato should not be confused with the meaning of the word in a moral sense for instance the "Form of the Good" is likened more to the form of the Truth rather than "This movie is good." ...read more.

will shed light on all other forms and will show us the truth and expose everything in its truest form but Plato fails to mention how exactly we should go about reaching the form of the Good all he does is tell us what not to do. Plato says that the way to reach reality is not to go down the path of empiricism and try to analyse the world around the forms and us and try to assume from empirical evidence of what is reality, instead Plato tells us only through inner contemplation can we hope to know the truth. Finally I think that another problem with Plato's theory of the Form's is the problem that he's not very clear about how specific forms are to certain items in the world of appearances. Is there a ideal Form of Animal to which all animals relate ourselves included or do Forms relate to specific animal species. Is there a ideal form for a dog what about a pregnant, blind and three legged Scottish terrier then the Forms stop being "universals" and degenerate into something which has little meaning or use. In my opinion I think the statement is correct and although some may argue Plato didn't need the empirical evidence that people criticised his theory on as it has very little I would say that we live in a sceptical world where in most cases its not what you know but what you can prove that is believed in the world and I see Plato's theory as too remote a concept to not be an invention. ...read more.