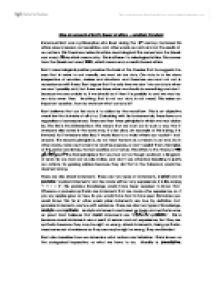 Give an account of Kant's theory of ethics - Jonathan Crawford Immanuel Kant was a philosopher who lived during the 18th century. He based his ethics around reason, not revelation, or in other words, our acts and not the results of our actions. This therefore makes his ethics deontological. This comes from the Greek root word, deon, which means duty. This is different to teleological ethics. This comes from the Greek root word, telos, which means end, or results-based ethics. Kant's deontological position provides the basis of the theories that he suggests. He says that in order to act morally, we must do our duty. Our duty is to be done irrespective of emotion, desires and situations and therefore we must not act in accordance with these. Kant argues that the only time we don't do our duty is when we can't possibly do it, but there are times when we should do something and don't because we are unable to. If we should do it then it is possible to and we must do our duty even then. Anything that is not our duty is not moral. ...read more.

Kant believes that moral statements are 'a priori synthetic'. This is because moral statements are a result of reason and not experience, but they are synthetic because they may be right or wrong. Moral statements, being synthetic, need some sort of evidence so they are may be right or wrong. They are bivalent. Kant also describes how we determine what actions are forbidden. This is known as the categorical imperative, or what we have to do. Morality is prescriptive, meaning it promotes moral behaviour, so once you know about this morality, you know why your doing this action. This is irrespective of the result, which means they are categorical. This is in contrast to hypothetical imperatives which are what we want to do, or our desires, which are not important. Behaving morally, and following our duty isn't all for nothing according to Kant. He believes that if you do your duty, you will reach the highest form of good known as good will. Once we have a good will it becomes a circle, as having a good will, means you do your duties, selflessly - not allowing emotions to get in the way. ...read more.

Or maybe the mother was raped, and the baby would be born into an unloving family. Kant has two answers to this. This first is that our duty is our duty. No emotions or situations should come in the way of our actions. If we let them do so, we are acting against the universal moral law and acting immorally. Kant's ethics are more concerned with the actions and not the results. So murder is always wrong. The second way he might answer this is by saying that no matter what the outcome of the event you must always do the right thing. If you use the example of a man who comes to murder your friend who is hiding inside your home. According to Kant it is the right thing to do as it is not your fault the man is misusing the information that you justifiably gave to him. This can be applied to the way the baby lives as a result of being allowed to live. So, in conclusion, it seems Kant's ethics are quite helpful; this is due to the style they are presented in. Because clear guidelines are given it is easy to apply them to situations, even though sometimes the answer may seem a bit harsh. ...read more.