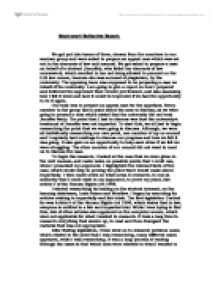 Moot-court Reflective Report. We got put into teams of three, chosen from the members in our seminar group and were asked to prepare an appeal case which was set out in the elements of law unit manual. We got asked to prepare a case on behalf of a student (Jennifer), who failed her elements of law coursework, which resulted in her not being allowed to proceed on the LLB law course, because she was accused of plagiarism, by the university. The opposing team was supposed to be preparing a case on behalf of the university. I am going to give a report on how I prepared and delivered the argument that I would put forward, and also assessing how I felt it went and how it could be improved if we had the opportunity to do it again. Our task was to prepare an appeal case for the appellant. Every member in the group had a point about the case to discuss, as we were going to present a case which stated that the university did not treat Jennifer fairly. The point that I had to discuss was that the university's treatment of Jennifer was not impartial. To start this, we all had to begin researching the point that we were going to discuss. Although, we were all individually researching our own point, one member of my co-council and I regularly had meetings to discuss our progress and how we felt it was going. It also gave us an opportunity to help each other if we felt we were struggling. ...read more.

However, we went back the next day to present our arguments, to discover that it had been postponed again, this time until the following week. This again was very disappointing, as we were ready to submit our arguments to the moot judge, so we could then begin to write our reflective report about it, but we then had to wait another week, before we could do this. When we finally got to present our arguments to the judge, I did not realise how nervous I would feel. I presented my argument first. As I had adequately prepared my argument in advance, I was able to maintain eye contact with the judge, and was able to use the notes I prepared as a guide. I was pleased when I had finished my moot, because I had actually done it and because it was over. I had already done a moot at the mooting and debating society, so I thought that it would be similar to this moot. However, I was a lot more nervous before presenting this moot. I think this was because I knew it would count towards the final mark of my overall grade for the unit. I had spent a lot of time preparing for this moot, which was good because I knew exactly, the points that I wanted to make. Although I knew what I wanted to say, I did get confused while I was giving the facts of the case that I had cited, so I had to find my place in my notes that I had prepared. ...read more.

I used this to my advantage, and the opposition did not pick up on this point which was good, because it made my argument look stronger. Although my council produced a skeleton argument in advance of our submissions, the members of the opposing council did not produce one, so we did not exchange skeleton arguments. It is important to exchange skeleton arguments, because they are a guide to what the other team will be discussing, and it can help make your argument stronger, if you know what the other team are doing and you can incorporate that into your argument and discredit it. In future I would like to exchange Skelton arguments. Overall, I felt that the moot went well for a first attempt at one. Everyone was feeling the same way about doing it, so there was no reason to worry. If I was to do another moot I would not worry as much and enjoy doing it more, because it is good experience if anyone did want to go on to become a barrister, and would have to stand up in court. It is also a good way to improve on communication, presentation and team working skills, which are essential to most jobs, which you could eventually go into. Although, I worked in a good group who got the work done, next time I would like to work in a group who all got together to discuss the work that we were doing. Although some things did go wrong while we were performing our moot, this has enabled us to notice what our weak point are, and give us an opportunity to improve on them next time. Total words: 2742. ...read more.