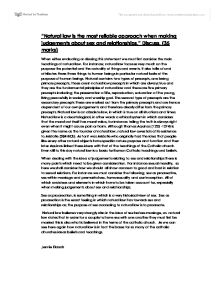 Natural law is the most reliable approach when making judgements about sex and relationships. Discuss.

"Natural law is the most reliable approach when making judgements about sex and relationships." Discuss. (35 marks) When either evaluating or disusing this statement we must first consider the main teachings of natural law. For instance; natural law focuses very much on the purpose the potential and the actuality of things and events. It also talks of and attributes these three things to human beings in particular natural looks at the purpose of human beings. Natural contains two types of precepts, one being primary precepts, these are in natural law precepts in which are always true and they are the fundamental principles of natural law and there are five primary precepts including; the preservation of life, reproduction, education of the young, living peacefully in society and worship god. The second type of precepts are the secondary precepts these are worked out from the primary precepts and are hence dependent of our own judgements and therefore clearly differ from the primary precepts. Natural law is an absolute law, in which is true on all situations and times. Natural law is a deontological, in other words a ethical system in which considers that the moral act itself has moral value, for instance telling the truth is always right even when it might cause pain or harm. ...read more.

Natural law believes that we should not have the power as humans to interfere with Gods work and as child and babies are his work for us to use contraception we would be interfering with his work, hence why contraception is not something in which natural law agrees with. There are many reasons and examples as to why some may see natural law as the most reliable approach when making judgements about sex and relationships. For instance it is universal, so applies in all situations and there can be no misunderstandings or wrong interpretations along the way as this is a universal clear cut approach. Some will also argue that this is a god given approach as the statements in which have become the rule and teachings/beliefs of natural law often come from the bible also not forgetting that natural law has very strong religious ties with the catholic church and hence many will argue that the fact that natural law is a god given approach, in many people's eyes, will mean that for many this makes it the best approach. Another reason as to why natural law is the best approach is because it does have very strong beliefs as to when it comes to relationships and these strong views in some people's minds mean that it is a reliable and good approach to use when in the dilemma of relationship questions. ...read more.

relationships. However, some who believe strongly in natural law will disagree, no doubt and will argue that there can be absolutes in terms of personal relationships and they may argue that everything in life can have and should have absolutes. And one rule in which applies in one aspect of life and surely then be applied to all aspects of life. Those who argue that there can't really be absolutes in terms of personal relationships might say that other theories due to this are more reliable. For instance, they might put forward Kant or utilitarianism as being more reliable. This could be because they are seen as being more flexible theories. Especially utilitarianism, as utilitarianism is a teleological theory, one in which argues that moral actions are right or wrong depending on their out as opposed to natural law which is not a teleological theory and is a deontological theory instead therefore is a theory in which is not very flexible and is a theory which is based on moral rules and whether action itself is right or wrong. To conclude, "Natural law is the most reliable approach when making judgements about sex and relationships", is a statement in which really depends on your personal views. ?? ?? ?? ?? Jennie Elcock ...read more.