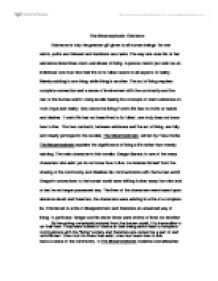 The Metamorphosis: Existence Existence is truly the greatest gift given to all human beings. As one exists, paths are followed and decisions are made. The way one uses his or her existence determines one's usefulness of living. A person cannot just exist as an individual; one must live their life to its fullest extent in all aspects of reality. Merely existing is one thing; while living is another. The act of living requires complete connection and a sense of involvement with the community and the rest of the human world. Living entails basing the concepts of one's existence on truth, hope and reality. One cannot be living if one's life has no truths or needs and desires. If one's life has not been lived to its fullest, one truly does not know how to live. The two contrasts, between existence and the act of living, are fully and clearly portrayed in the novella, The Metamorphosis, written by Franz Kafka. The Metamorphosis explains the significance of living a life rather than merely existing. The main character in this novella, Gregor Samsa, is one of the many characters who exist yet do not know how to live. He isolates himself from the sharing of the community and disables his communication with the human world. Gregor's connections to the human world were drifting further away from him and at last he no longer possessed any. The lives of the characters were based upon absolute deceit and therefore, the characters were existing in a life of a complete lie. This lie led to a life of disappointment and therefore an unwanted way of living. In particular, Gregor and his sister Grete were victims of lives not decided on their own. They were robbed of choice in their being which lead to complete unfulfillment. One must do more than exist; one must learn how to live. By becoming completely isolated from the human world, it is impossible to communicate with the "living" society and therefore one cannot be a part of and have a sense of the community. ...read more.

Father and mother, from either side, attentively followed the movements of her hands. Attracted by the playing, Gregor had dared to come out."(Kafka 48/49) For once in his life, Gregor felt fulfilled when he heard his sister playing, for it reminded him of the former human world that once existed. The sound he hears returns him to his humanity, allowing him to recognize his love for his sister and his desire to send her to the Conservatory. The music has touched Gregor in a completely new way. While he was the human Gregor Samsa, he had never experienced Grete's playing in this profound manner. Gregor has reclaimed his humanity only by becoming an insect. However, this realisation of his family and their happiness, ultimately leads Gregor's to his death. Gregor realises that he must please his parents, yet again, and in order to make them happy, he forces himself to die. Gregor has now officially lost all of his links to the human world for he has hit the bottom of his deterioration and died. A shattered link to humanity is a true consequent of a life centralized on deceit and misconception for a beneficial life should be based on hope and truth. For the majority of Gregor's life, he spent each day working because he was led to believe that his family would deteriorate if he did not, given that Gregor was held responsible for paying off his parents' debt. What a gruelling job...I've got the torture of traveling, worrying about changing trains, eating miserable food at all hours, constantly seeing new faces, no relationships that last or that get more intimate...That's all I'd have to try with my boss; I'd be fired in the spot...If I didn't hold back for my parents sake, I would have quit long ago. (Kafka 4). However, after his metamorphosis, Gregor realizes, on the contrary, that his family is in a very good financial situation. ...read more.

(Kafka 58) After having exploited and dehumanizing their son, the Samsa's will now do the job on the daughter. They will find her a husband and a new life whether she accepts it or not. She, as well, will not be able to live her life to the ultimate fullest for it will be the desired life of merely her parents will. She cannot and will not learn how to live for she will not be given any choice or judgement in her existence. Her parents control will lead her as well through her life. It has become a cycle of misfortunes and unfulfilling lives that the parents have begun and will continue. An individual must do more than exist; they must learn exactly how to live. The Metamorphosis shows clearly the ways people can exist but do not actually "live". A life in isolation is not the way of living, but is merely a form of existence; however, since there are no connections with the human world, one can no longer apart of the community or society. As well, lives based on negative values, deceit and misconception are not realities. Lives cannot be centered on these factors for it will eventually lead to disappointment and unfulfillment. This unfulfillment can be a cause of lives not decided on by oneself. They are lives predetermined and without choice in one's life, this ends in deterioration and in a life not worth existing since it is one without satisfied potential and expectations. Nevertheless, apart from the novella, a life should be lived in absolute freedom. One should decide their own path of life to follow and should share and be a part of the human community; for this is what actual "living" entails. Merely existing does absolutely nothing in a person's life; existence should be taken advantage of so one must use his or her existence to its greatest possible potential and live their fullest so that absolute disappointed, at all cost, will be avoided. ...read more.