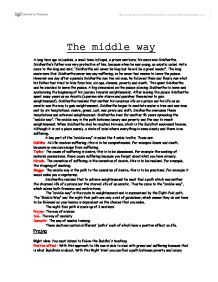 The middle way A long time ago in Lumbini, a small town in Nepal, a prince was born; his name was Siddhartha. Siddhartha's father was very protective of him, because when he was young, an ascetic called Asita came to the king and said, "Siddhartha will never be king but he will be a great leader". The king made sure that Siddhartha never saw any suffering, so he never had reason to leave the palace. However one day after a parade Siddhartha saw two old men, he followed them and finally saw what his father had tried to hide from him; old age, disease, poverty and death. This upset Siddhartha and he decided to leave the palace. A fog descended on the palace allowing Siddhartha to leave and symbolising the beginning of his journey towards enlightenment. After leaving the palace Siddhartha spent many years as an Ascetic (a person who starve and punishes themselves to gain enlightenment). Siddhartha realised that neither his luxurious life as a prince nor his life as an ascetic was the way to gain enlightenment. Siddhartha began to meditate under a tree and was soon met by six temptations; desire, greed, lust, war, pride and sloth. Siddhartha overcame these temptations and achieved enlightenment. Siddhartha lived for another 45 years spreading the "middle way". The middle way is the path between luxury and poverty and the way to reach enlightenment. ...read more.

Sila Right Speech- Speak in a truthful and positive manner. Positive effect- You are being true to yourself, which is important because you are not going along with what ever other people want. This means that you are not tempted to stray from 'The Middle Way'. Right Action- Follow the five moral precepts. Positive effect- The five moral precepts warn against taking life, telling lies, stealing, having harmful sex and clouding your mind with drink and drugs. These precepts would make you a better person because you would always be in control of your own mind and so be able to follow "The Middle Way". Right Livelihood- Have a job that does not go against Buddha's teachings or his principals. Positive effect- Your job is helping other people instead of yourself which is very important in "The Middle Way" . Samadhi Right Effort- Banish negative or damaging thoughts from your mind and replace them with positive ones. Positive effect-You will not feel any jealousy or hurt, which is good because they are a form of suffering and the point of the "The Middle Way" is to stop suffering. Right Mindfulness- Putting others and their needs before your own. Positive effect- You are putting other peoples needs before your own and so have stopped desiring for more than you can have. This is important in "The Middle Way". ...read more.

For example saving a life is indicative of Good Karma whereas lying or cheating is Bad karma. Both Karma and the "Middle Way" allow you to choose what you want to do but lets you know that there are consequences to your actions. Buddhism became popular with the West during the 1960's and 1970's with the growth of free and love and the embracing of Eastern ideas and philosophies. In Britain Buddhism has taken the form of the "Friends of the Western Buddhist Order" (FWBO). This group uses traditional teachings and practises but adapts them to the West. FWBO offer all different classes for members and non members. These classes such as Yoga and meditation can help people calm their mind and may lead them on to more traditional Eastern Buddhism. Members of the West are attracted to the free will of Buddhism. It gives you guidelines; The eight-fold path and the 5 moral precepts but it allows you to make up your own mind. As such you are more in control of you destiny. The "Middle Way" also allows you to pick the life you want to lead because only you can really decide what is the balance between poverty and luxury. The West may also be attracted to Buddhism because it preaches peace and in the violent and volatile situation we live in at the moment (terrorism, war, street crime) people may need to believe there is another way out there (The "Middle Way"). Katrina Barnard 11CC ...read more.