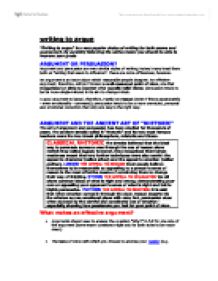 writing to argue "Writing to argue" is a very popular choice of writing for both exams and coursework. By carefully following the advice below you should be able to improve your grade ARGUMENT OR PERSUASION? Argument and persuasion are very similar styles of writing; indeed many treat them both as "writing that seeks to influence". There are some differences, however. An argument is an issue about which reasonable people disagree. An effective argument, therefore, will put forward a well-reasoned point of view, one that recognises but aims to counter other equally valid views; persuasion tends to be far more single-minded in its aim to change minds. A good argument is based, therefore, mainly on reason (even if this is passionately - even emotionally - conveyed); persuasion tends to be a more one-sided, personal and emotional conviction that only one way is the right way. ARGUMENT AND THE ANCIENT ART OF "RHETORIC" The art of argument and persuasion has been studied for thousands of years. The ancient Greeks called it "rhetoric" and its two most famous teachers were the two Greek philosophers, Aristotle and Cicero. CLASSICAL RHETORIC The Greeks believed that the ideal way to persuade someone was through the use of reason alone (which they called ...read more.

1. Plan 2. Write 3. Check 1. PLAN * Planning: Put simply, you will probably lose marks if you fail to plan before you write. Each year the examining boards report that this is the case. The mark schedules state that the student's argument needs to be "consciously shaped" and this means well-structured; a plan is essential for this. You have one hour for this question so time is on your side for once. * Decide on what would be a suitable style for your kind of reader. * Brainstorm to create a list of points in favour of your idea. Choose five of the most convincing. Check that each point is truly separate and not a part of a larger, more general point; if it is, use the larger point. Make sure each point is truly convincing - switch roles: would these persuade you? * Organise these five points into a progressive and persuasive order. * Create an equivalent list of "opposing" points that you may need to counter. * Work out a few ways to add interest and authority to your writing: rhetorical questions, an effective anecdote a piece of research, an expert opinion. ...read more.

You are failing to recognise where the end of the sentence should have been. Too much of this leads to a dreary and difficult-to-read style because it destroys the clarity and crispness that is a necessary part of all good writing. A sentence is a group of words that is about one main idea or "thought". It should seem "complete" to its reader. Sentences that drift into several ideas, or which seem incomplete, are less clear and interesting to read. Ending a sentence with a comma (or even nothing but a space) instead of a full stop will allow it to "run on" or drift in this way. Try to use commas only to mark off parts of a sentence so that the sentence reads more smoothly or makes clearer sense. Look at every apostrophe. Look at the words you have used that end in "s". Are they plurals? If so the chances are they do not need an apostrophe. Apostrophes are used to show when a letter has been missed out (as in: shouldn't) and when two nouns belong to each other (as in: the school's entrance). Also... make sure that when you write "it's" you do mean "it is" (as in it's cold) not "belonging to it" (i.e. as in: its surface). ...read more.