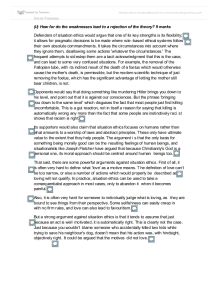 Defenders of situation ethics would argue that one of its key strengths is its flexibility; it allows for pragmatic decisions to be made where rule-based ethical systems follow their own absolute commandments.

(ii) How far do the weaknesses lead to a rejection of the theory? 9 marks Defenders of situation ethics would argue that one of its key strengths is its flexibility; it allows for pragmatic decisions to be made where rule-based ethical systems follow their own absolute commandments. It takes the circumstances into account where they ignore them, disallowing some actions 'whatever the circumstances.' The frequent attempts to sidestep them are a tacit acknowledgment that this is the case, and can lead to some very confused situations. For example, the removal of the Fallopian tube, with its indirect result of the death of a foetus which would otherwise cause the mother's death, is ...read more.

This is a gut reaction, not in itself a reason for saying that killing is automatically wrong any more than the fact that some people are instinctively r****t shows that r****m is right. Its supporters would also claim that situation ethics focuses on humans rather than what amounts to a worship of laws and abstract principles. These only have ultimate value to the extent that they help people. The argument is that the only basis for something being morally good can be the resulting feelings of human beings, and situationalists like Joseph Fletcher have argued that because Christianity's God is a personal one, its moral approach should be centred around human beings too. ...read more.

Also, it is often very hard for someone to individually judge what is loving, as they are bound to see things from their perspective. Some selfishness can easily creep in with no firm rules, and love can also lead to favouritism. But a strong argument against situation ethics is that it tends to assume that just because an act is well motivated, it is automatically right. This is clearly not the case. Just because you wouldn't blame someone who accidentally killed two kids while trying to save his neighbour's dog, doesn't mean that his action was, with hindsight, objectively right. It could be argued that the motives did not love. ?? ?? ?? ?? Kerrie Freeman ...read more.

The essay lands a couple of good points in favour of situation ethics. Nevertheless, it is held back by the absence of a clear conclusion, and indeed, argument in general, that addresses the question. Given the question, a little more focus on the weaknesses of the approach would be good here, even if it is ultimately argued that they do not overcome its strengths. While good points are made pro and con situation ethics more consideration is needed in terms of weighing these up, rather than just listing them.