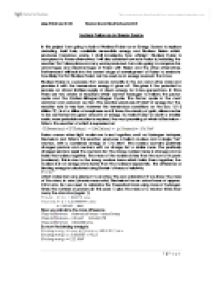 A2 OCR B (Advancing Physics) - Research and Report: Nuclear Fusion as an Energy Source

Nuclear Fusion as an Energy Source

In this project I am going to look at Nuclear Fusion as an Energy Source to replace dwindling fossil fuels, unreliable renewable energy and Nuclear Fission which produces hazardous waste. I shall investigate how efficient Nuclear Fusion is compared to these alternatives. I will also consider how safe Fusion is; including the reaction that takes place and any waste produced. I am also going to compare the advantages and disadvantages of Fusion with Fission and the other alternatives. Furthermore I will look into the current stage of development of Fusion to evaluate how likely it is that Nuclear Fusion can be used as an energy source in the future

Nuclear Fusion is a process that occurs naturally in the sun (and other stars) and provides it with the tremendous energy it gives off. This gives it the potential to provide an almost limitless supply of clean energy for future generations. In Stars there are two chains of reactions which convert hydrogen to helium; the proton cycle and the Carbon-Nitrogen-Oxygen Cycle. The Proton cycle in the most common and occurs in our Sun. The reaction produces 27 MeV of energy but the reaction rate is very low, however the tremendous conditions on the Sun; 10-15 Million °C, ¼ of a trillion atmospheres and 8 times the density of gold, allows matter to be converted into great amounts of energy. To make Fusion on earth a smaller scale, more probable reaction is required, the most promising of which is Deuterium-Tritium. The reaction of which is expressed as: 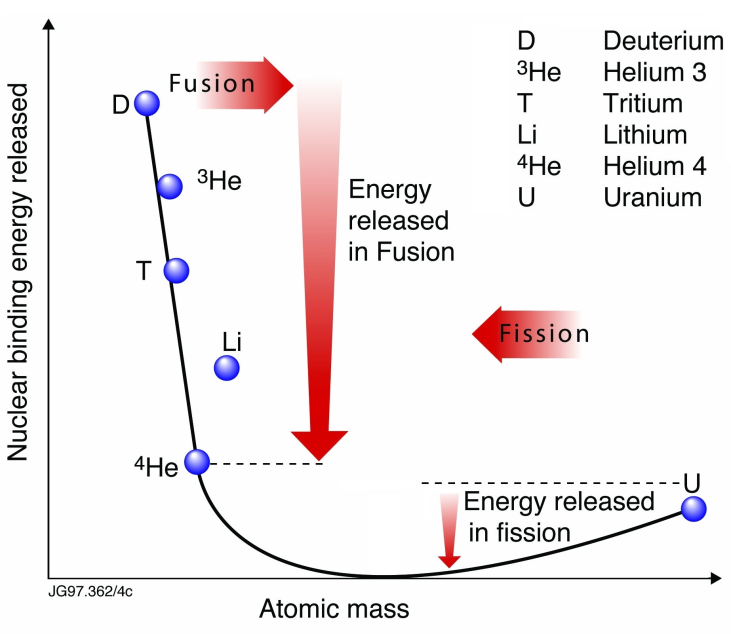 The world’s natural resources are estimated to last about 30 – 70 years, but it could be much more or much less. Energy demand is increasing due to population growth, more energy use per capita and as more countries develop industry.  This currently relies on fossil fuels; 80% of the world energy demand. There is a great demand for a safe renewable energy source to help control climate change and have the security of supply. Renewable energy technologies such as solar, wind, tidal, wave, biomass, geothermal and hydro are not very reliable due to their dependence on nature; which varies significantly and is subject to sudden change. They suffer from isolated availability; certain environmental conditions are more suited to wind and solar energy for example, and hydro/wave energy can only be exploited if a water supply is nearby. The energy produced is also very small compared to Oil or Coal for example thus preventing the possibility of relying total on renewable energy. Nuclear Fission is the brother to Fusion, though it is more developed and is currently used to generate energy. However it causes great safety concern; in some severe circumstances radiation can be released from the reactor core putting the surrounding area at risk. There is also the concern of nuclear waste created from nuclear plants as to where to put it. Furthermore there is a security concern when hostile nations use fission power this is because though the fuel uranium-235 cannot be used for a bomb (enriched to only 3%-5%)

Nuclear Fusion is entirely feasible as a future energy source though it will be a long time before they will overtake traditional natural resources in terms of percentage of the Earth’s energy provided. Estimated put it around 2050 until fusion power plants are in full commercial use. It is proven that fusion is the most efficient energy source we have to date; 4 times more than that of nuclear fission. It is inherently safe, and there is no hazardous waste except some radioactive materials from free neutrons, though in future designs this could be eradicated. Research is currently going well; all that remains is for bigger more powerful models and with ITER on the horizon it will not be long before a self sustaining fusion reaction with a positive output is achieved. This means well into the future 100% waste free fusion plants could provide nearly all of the world’s electricity, resulting in a clean safe environment with a massively reduced threat of global warming.