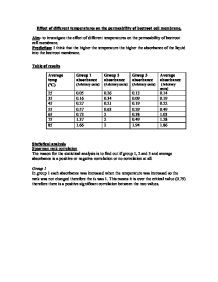 Effect of different temperatures on the permeability of beetroot cell membrane.

This has been shown by a steady increase in anthocyanin (polar molecule) leaked out of plant cells as the temperature increases. So this is what has caused more leakage from beetroot cells. The higher the temperature the more the protein has changed in shape, which is the reason for the absorbance increasing when beetroot is heated at higher temperatures. At low temperatures such as 35�C-45�C the 3D shape of the proteins isn't changed too much, so not much leakage takes place. So there was more diffusion of the anthocyanin in higher heated beetroot cells, but that was due to the shape of the protein being changed, not the kinetic energy. Also during the 1 minute the beetroot membrane was heated the phospholipids were changed but this was only temporary, once the beetroot was back at room temperature the phospholipids changed back to their original form. What happens is at high temperatures the phoispholipids don't fit together as easily, as the membrane becomes more fluid. This means there is a slight chance of substances getting through past gaps between the phospholipids, but most of the time they still acted as a barrier to ions and polar molecules even if there was gaps between them. ...read more.

Percentage of errors The formula that is used to find out due to measuring equipment is: Minimum measurement Actual measurement Errors due to thermometer 25�C So you apply the formula above: Now add and subtract 4% of 25�C (which is 1) to 25�C. 1 + 25=26 1- 25=24 85�C Now add and subtract 1.2% of 85�C (which is 1.02) to 85�C 1.02 + 85= 86.02 1.02 + 85=84.02 Errors due to absorbance Many instruments contribute to absorbance error, these are:: Lowest point Highest point * Ruler (21mm) 4% 4% * Syringe (10cm3) 5% 5% * Clock (1min) 2% 2% * Colorimeter 7% 0.53% Lowest point Highest point Compound error 18% 11.53% The percentage of error of the thermometer isn't too bad, it doesn't effect the results that and shows the thermometer is quite reliable. The absorbance compound error at my highest point had a major effect on the result, it shows the equipment used for absorbance cause a massive error, as show on my average absorbance graph. While at the lowest point shows the compound error is high (17%), and has a major effect on the result. The percentage of errors of the equipment puts a question mark on the accuracy and reliability of the results. ...read more.

***
This report in to the effect of different temperatures on the permeability of the beetroot cell membrane is not complete but there are still some very good sections, as well as some that could be improved.
Firstly the aim / prediction of the experiment should be central to the entire investigation, yet the effect of temperature on the permeability of the cell membrane based on the data collected is not included.
The data collection section is well presented and shows some good trends which were analysed well using statistical analysis.
The evaluation is thorough but would benefit from being less critical of the method.
Overall, a good foundation for a very good investigation.