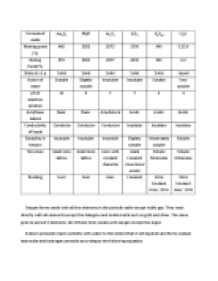 Essay on the Oxides of Period 3 Elements

Chlorine(I) oxide, reacts with water to some extent to yield hypochlorous acid. The reaction is reversible which indicates that the hypochlorous acid yielded is a moderately weak acid with a pKa of 7.53. Its anion formed is not stable and readily reclaims hydrogen to revert back to acid. The hypochlorous acid formed will slowly decomposed into hydrochloric acid and oxygen gas in the presence of sunlight. 2HOCl 2HCl + O2 The structure of period 3 oxides is determined by the difference in electronegativity between each element in period 3 and the oxygen element. The electronegativity increases across period 3. Oxygen is more electronegative than any of the elements in period 3. Thus, the difference in electronegativity becomes smaller and smaller across the period 3. When the difference becomes smaller, the bonding becomes weaker. Thus, the trend of the structure is from giant ionic to giant covalent and finally small and simple covalent. The bonding is from ionic bonds in metal elements to covalent bonds in non-metal elements. Firstly, the structure of both sodium oxide and magnesium oxide is giant ionic structure. Both intermolecular and intramolecular bonding in the first two oxides is ionic bond. ...read more.

At the same time, the oxygen atom in non-metal oxide forms a bond with hydrogen atom in water molecule. The breaking of water molecule forms an oxoacid which then splits into corresponding anion and hydronium ions. Silicon, the element next to aluminium has a weakly acidic oxide. Phosphorous pentoxide, P4O10 has a higher acidity than silicon dioxide while chlorine(VII) oxide, Cl2O7 has the highest acidity among all the oxides of period 3. There are some precautions in this experiment. Firstly, when handling chemicals like phosphorus(V) oxide and sodium peroxide, extra care must be given. This is because phosphorus(V) oxide is an irritant which is also corrosive. If come in contact, it irritates eyes and skin as well as our lungs when inhaled. Sodium peroxide which is a powerful oxidant is also corrosive in nature. Physical contact will these chemicals should be avoided. Rubber gloves are worn all the time when handling these chemicals. Secondly, when mixing chemicals into distilled water, the boiling tubes should be placed on the tabletop and away from the eyes. Gas may evolve when mixing chemicals. These gas might irritate eyes and causes damage to lungs if inhaled. Next, when chemicals are dissolve in distilled water, the products formed is corrosive especially for sodium peroxide and phosphorus pentoxide. Direct handle should be avoided to prevent injury. ...read more.