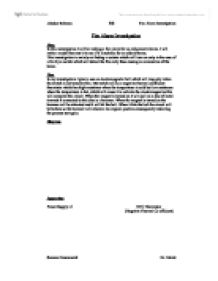 In this investigation I will be making a fire alarm for an old person’s home. I will make a model then test it to see if it is suitable for an elderly home.

This investigation is mainly on finding a resistor which will turn on only in the case of a fire by a switch which will detect the fire early thus causing an evacuation of the home.

In my investigation I plan to use an electromagnetic bell which will ring only when the switch is activated by fire. My switch will be a negative thermal coefficient thermistor which has high resistance when the temperature is cold but low resistance when the temperature is hot, which will cause it to activate the electromagnet as this will complete the circuit. When the magnet is turned on it will pull on a disc of metal towards it connected to this disc is a hammer. When the magnet is turned on the hammer will be attracted and it will hit the bell.

There are a lot of safety issues in this investigation. There is the risk of electrocution from the wires as at the end it is only live wire and if not use properly it may be fatal.

The power supply may also cause electrocution.

Also there may be electrocution from the cup of water as it will be used to cool down the thermistor as it is very sensitive but water conducts electricity so it will have to be handled with care.

I may get burnt by the Bunsen burner as it can get very hot and this can burn my skin.

As this is electricity I don’t know if the circuit may just blows, this is another factor.

As you see there are lots of safety issues to contemplate during the investigation.

Working On the Fire Alarm

My idea of the electromagnet did work and my prediction of how the circuit would work is correct.

Weaknesses in the investigation are that the thermistor being made of plastic melted when it was placed on the Bunsen burner. I will show how to improve this below.

I found that I had to make the position of everything had to be precise or the circuit would not work at all as there would be no flow of electrons due to breaks in the circuit.

I stated above that the Bunsen burner melted the thermistor so I would cover this up with a shell which would not damage the thermistor but another question arises? Will the shell affect the temperature?