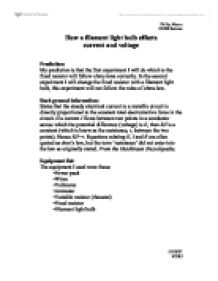 How a filament light bulb effects current and voltage.

How a filament light bulb effects

States that the steady electrical current in a metallic circuit is directly proportional to the constant total electromotive force in the circuit. If a current I flows between two points in a conductor across which the potential difference (voltage) is E, then E/I is a constant (which is know as the resistance, r, between the two points). Hence E/I=r. Equations relating E, I and R are often quoted as ohm’s law, but the term ‘resistance’ did not enter into the law as originally stated. From the Hutchinson Encyclopedia.

The equipment I used were these:

This has the fixed resistor in it, the

5Turn the power pack off move the variable resistor

6Repeat this 7 times to make the experiment fair

7Now swap the fixed resistor with a filament light bulb

8Take the readings as before and turning it on and off like before and repeat this 7 times.

To make this test fair I am going to repeat the test 2 times. This will show up any problems with the results. I will also move the arm on the rheostat the same distance each time on the each test I do e.g. 5cm. I will also make sure the rheostat doesn’t get to hot because that will change the outcome of the results, I will stop this happening by turning off the power each time I am not taking a reading from the voltmeter or ammeter

The way I will go about obtaining the evidence will be by waiting for the voltage and current to settle down so to be able to read the best possible result.

I was pleased to

The things I have found are that ohms law can be broken by a filament light bulb but a fixed resistor will not break ohms law.

I think my results are accurate enough to be used as examples. This means they are good enough to go on the internet or in books supporting ohms law.

The procedure went well and there were no problems with the result gathering Which were accurate I think the experiment could be made faire by measuring the length that the arm was moved on the rheostat each time and making sure that you use the same exact  equipment each time as well if you had to record the results over 2 lessons.

The improvements I would make are to have more time collecting more evidence to make the test fair. This would include the improvements I have suggested measuring the distance you move the arm on the rheostat each time and having more time to compete the test but within the same day.