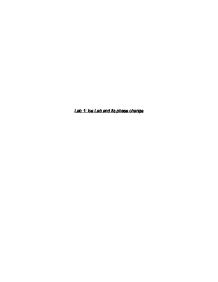 Ice Lab and its Phase Changes

Lab 1: Ice Lab and its phase change Introduction: Everything is made up of matter. It has shape, volume and mass. All one hundred and nine elements have three states and provide the world with daily activities. An element at a solid state has particles that are very close together and vibrate. A solid state has a set shape, mass and volume and this gives it a tough shape. The second state of an element is a liquid and it also has a set volume and mass. In this state the particles vibrate and rotate in a limited space. However, like the solid they do not have a rigid shape, liquids are shaped liked the object in which they are poured. The last state of the elements is a gas. Particles of gas are very free and can vibrate, rotate, move rapidly, and the shape of gas is not known. These three states are very amusing when one experiments and looks at the changes from one phase to another. In addition, when one state changes from solid to liquid, the particles move more rapidly and the energy is more increased. ...read more.