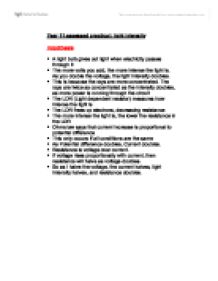 This is how I will set up the apparatus. Below is a circuit diagram.

The set up of the circuit is simple as shown above. The 12-volt lamp is set up in a simple circuit. Then in a SEPARATE circuit, the light dependent resistor is connected to the Multimeter, which shows the resistance readings. If I did connect the LDR in the same circuit, I would almost certainly fry the LDR, and ruin the experiment! I want to keep the distance from the lamp to the LDR the same.

Distance of the LDR from the bulb kept constant (directly underneath the bulb, 0cm)

On the previous page is the graph; now I will try to sum up the results.

These are massive differences, and the reason for the large resistance readings at 0.0 and 2.0 volts is that the LDR sensed no light with which it frees electrons, therefore decreasing resistance. The bulb visibly gave out light at 4.

These could all be incorporated into the method, and if I did this experiment again, I could add these extra points to the method

Other than that I think the method works well. I left out the points regarding letting the system cool down, as there is not enough time to do the experiment in, and I could certainly not use a whole day to take results. If I had the time, I would also try to take more sets of readings, up to 10 sets, to get the best graphs. However, the above points are a realistic way of improving my results next time.