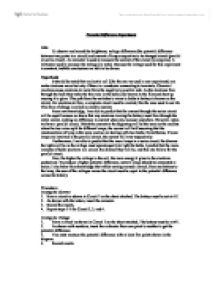 Observe and record the brightness, voltage difference (the potential difference between two points in a circuit) and current of lamps respective to its changed circuit (parallel or series circuit).

To observe and record the brightness, voltage difference (the potential difference between two points in a circuit) and current of lamps respective to its changed circuit (parallel or series circuit). An ammeter is used to measure the current of the circuit (in amperes). A voltmeter used to measure the voltage (in volts). Because the voltage used for this experiment is constant, truthful conclusions are able to be drawn.

It should be noted that an electric cell (like the one we used in our experiment) can make electrons move but only if there is a conductor connecting to terminals. Chemical reactions cause electrons to move from the negative to positive side. As the electrons flow through the bulb they make the thin wire in the bulb (also known as the filament) heat up causing it to glow. This path from the switches to wires to bulbs to battery is known as the circuit. For electrons to flow, a complete circuit must be created; like the ones used in our lab. This flow of charge is called an electric current.

From own knowledge, I am able to predict that the current through the series circuit will be equal

As we can see in our first, second and third circuit, the current of the circuit stays the same through out.

Circuit 1: As seen in this circuit, the current is approximately the same differing by .01 amps. It is probable that our results may not be accurate as we know from information that the current should remain constant through out the circuit. It is likely that our readings may not have been completely accurate and furthermore the ammeter does not show us thousands of decimals! We had also observed that the lamp was very bright.

Circuit 2: In this circuit, the current had stayed constant like predicted in my hypothesis. The current had remained .033 amps. However, the light had been less bright than the circuit before. The reason for this will be given in my conclusion.

Circuit 3: Like the previous circuit, the current in this one is also unvarying. The current with this circuit that had three light bulbs had been .027 amps. Nevertheless, the lamps had become even less bright and quite dim.

Circuit 4: My hypothesis for this circuit had been partly correct. It is

This lab would have been more efficient and spared time if we had put together one circuit and measured both the current and the potential difference at the same time in place of doing them separately. Furthermore, it should definitely been taken into consideration that the ammeters and voltmeters may not have been 100% accurate as our results show due to running out of battery etc. A change in the tools may have caused differentiating results as we had not been constant through out the experiment. Additionally, taking a reading 4 to 5 times would have made results much more precise but due to time limitations this was not possible.