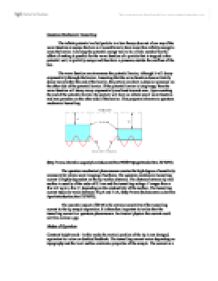 The infinite potential walled particle in a box theory does not allow any of the wave function to escape the box as it would have to have more than infinity energy to cross the barrier. Allowing the potential energy well to be a finite number has the effect of making it possible for the wave function of a particle that is trapped in this potential well, to partially escape and thus have a presence outside the confines of the box.

Constant height mode - In this mode the vertical position of the tip is not changed, equivalent to a slow or disabled feedback. The tunnelling current varies depending on topography and the local surface electronic properties of the sample. The current as a function of lateral position represents the surface image. This mode is only appropriate for atomically flat surfaces. If the surface was not flat, the STM tip would crash. An advantage of constant height mode is that it can be used at high scanning frequencies (up to 10 kHz). 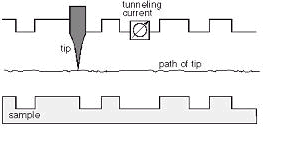 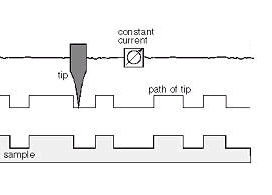 The construction of the tip is one of the most crucial aspects of STM. The tip must be approximately one atom thick in order for the STM to be carried out effectively. “Surface pictures can appear to be distorted due to the presence of more than one sharp protrusion”, (………). Some important characteristics of a tip are

It appears that multiple tips are formed when suspended particles are picked up from the etching solution, (……same as above).