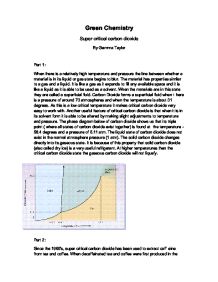 Super critical carbon dioxide - its characteristics and use in making decaffinated coffee.

Green Chemistry Super critical carbon dioxide By Gemma Taylor Part 1: When there is a relatively high temperature and pressure the line between whether a material is in its liquid or gas state begins to blur. The material has properties similar to a gas and a liquid. It is like a gas as it expands to fill any available space and it is like a liquid as it is able to be used as a solvent. When the materials are in this state they are called a superficial fluid. Carbon Dioxide forms a superficial fluid when there is a pressure of around 73 atmospheres and when the temperature is about 31 degrees. ...read more.

. Supercritical carbon dioxide is an excellent non polar solvent for caffeine, and it is safer than the organic solvents that can also be used to extract the caffeine from coffee. The stages of using critical carbon dioxide to extract caffeine from coffee is the CO2 is forced through the green coffee beans at temperatures above 31.1 �C and pressures above 73 atm. Under these conditions, CO2 is in its "supercritical" state, so it has it's gas like properties that allows it to penetrate deep into the beans but also has its liquid-like properties that dissolves 97-99% of the caffeine. The caffeine-laden CO2 is then sprayed with high pressure water to remove the caffeine. The caffeine can then be isolated by charcoal adsorption or by distillation, recrystallization, or reverse osmosis. ...read more.

The response to the topic is very well researched and described. The candidate uses terms and communicates in a way which make it very easy for the reader to understand the concept of 'supercritical' by first explaining what this means ...

The response to the topic is very well researched and described. The candidate uses terms and communicates in a way which make it very easy for the reader to understand the concept of 'supercritical' by first explaining what this means in the terms of gas and liquids and then relating this to carbon dioxide, and the uses of this. The candidate starts simple and builds on the different concepts. The candidate should have included a clear introduction which set out the concept of supercritical, and then related this to carbon dioxide in further text rather than setting this out in one block of text as this reads a lot better.

The candidate explains the concept of supercritical carbon dioxide very well in this essay. At first the candidate explains the concept of what 'supercritical' actually means and how this relates to carbon dioxide and possible uses. The candidate synthesises a number of sources to explain this concept clearly with a diagram that supports the text. Using a number of texts means the reader understands the concept more, and is able to communicate the concepts in an easy to understand way. The text is split into two parts which helps the reader understand the concept of 'supercritical' before the reader explains the use and method of this in making decaffinated coffee and shows good research depth by comparing it to prior methods that used to be used. Rather than the references being listed at the bottom, I would have used a better referencing system which outlines where certain points in the text came from as this is the correct way for professional scientific articles.

Spelling, grammar and punctuation are all to a very high level with no errors. Rather than using the titles 'part 1 and part 2' I would have used clear subheadings which allowed the reader to clearly ascertain the subject of that body of text. In addition, points could be split into further sub-paragraphs to make the different points easier to follow rather than being two large blocks of text.