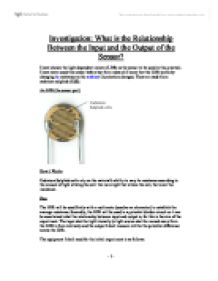 The Relationship Between the Input and Output of an LDR

Investigation: What is the Relationship Between the Input and the Output of the Sensor?

I have chosen the light dependent resistor (LDR) as the sensor to be used in this practical. I have never used this sensor before but from research I know that the LDR works by changing its resistance as the ambient illumination changes. They are made from cadmium sulphide (CdS).

An LDR (the sensor part)

Cadmium Sulphide cells rely on the material's ability to vary its resistance according to the amount of light striking the cell: the more light that strikes the cell, the lower the resistance.

The LDR will be used firstly with a multimeter (used as an ohmmeter) to establish the average resistance. Secondly, the LDR will be used in a potential divider circuit so it can be ascertained what the relationship between input and output is, for this is the aim of the experiment. The input shall be light intensity (a light source shall be moved away from the LDR in 3cm intervals) and the output I shall measure will be the potential difference across the LDR.

The equipment I shall need for the initial experiment is as follows:

The multimeter will be set to measure resistance. The alternative to using a powerpack is to use a battery pack. However, from experience and my own knowledge I know that the 6V battery pack is insufficient to cause the bulb to light due to high internal resistance, so not enough voltage to power the bulb. On the other hand, the powerpack has very low internal resistance, and so is the best choice to power the bulb.

Ohmmeter and LDR connected in series.

Diagram of my initial experiment (taken from http://www.doctronics.co.uk/ldr_sensors.htm) 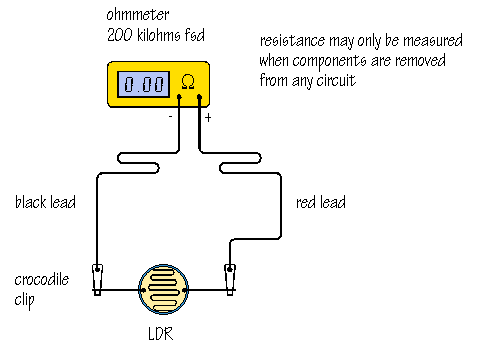 The equipment I will need for the second part of the experiment is as follows:

This time the multimeter will be set to measure potential difference (and so will act as a voltmeter).

In this experiment, the dangers are only that the bulb could become very hot so there is a small risk of burns (particularly to the hand). Heavy equipment (e.g. the powerpack) could fall and do serious damage to a person’s foot. Also, wires could trip people up, this is in the case of the longer thicker wire that will be connected to the mains supply (the powerpack’s wire). To combat these hazards I shall always pick the bulb up by its wooden pedestal when I am positioning it, I shall keep the powerpack away from the edge of the desk and I shall be wary of knocking it, and I shall ensure the wires are tucked away and off the floor so as not to cause accidents.

I am expecting the potential difference to increase the further away the bulb is moved from the LDR. The light falling on the brown ‘zigzag’ lines on the sensor (cadmium sulphide cells), causes the resistance of the device to fall.  This is known as a negative co-efficient. Therefore, I know that the potential difference will also fall based on the following equation:

I plan to take 7 values at 3cm intervals: 0cm from bulb (bulb and LDR touching), 3cm, 6cm, 9cm, 12cm, 15cm and 18cm. The resolution of the voltmeter will be 0.1mV for distances of 0-9cm and then 0.01V for distances 12-18cm. I will repeat the experiment 3 times. I shall plot a graph of the averages of all my results, and also a graph of each set of results so I can compare them and note the reliability of them. In this experiment, the best way to represent the data is as a scatter diagram. I considered also taking a reading of the bulb being completely covered. However, from my preliminary experiment I know that when placed completely in the dark the resistance will increase to 1 MΩ or more. To establish a reasonable average resistance I will get more meaningful results by decreasing the amount of light falling on the LDR gently – 3cm intervals. Also, from my preliminary I know that light from other experiments close by can interferes with my own experiment. To combat this I shall use a piece of black paper, propped up by any objects close by to shield our experiments from each other’s.

Due to the huge range I took an intermediate value: 1.95kΩ.

In this table the resistance is displayed to 3 significant figures.

To calculate the average resistance I added all three values and divided by 3.

According to this, the average resistance is 2375 kΩ, but because of the magnitude of this I know the resistance I will use will be slightly lower (470kΩ). 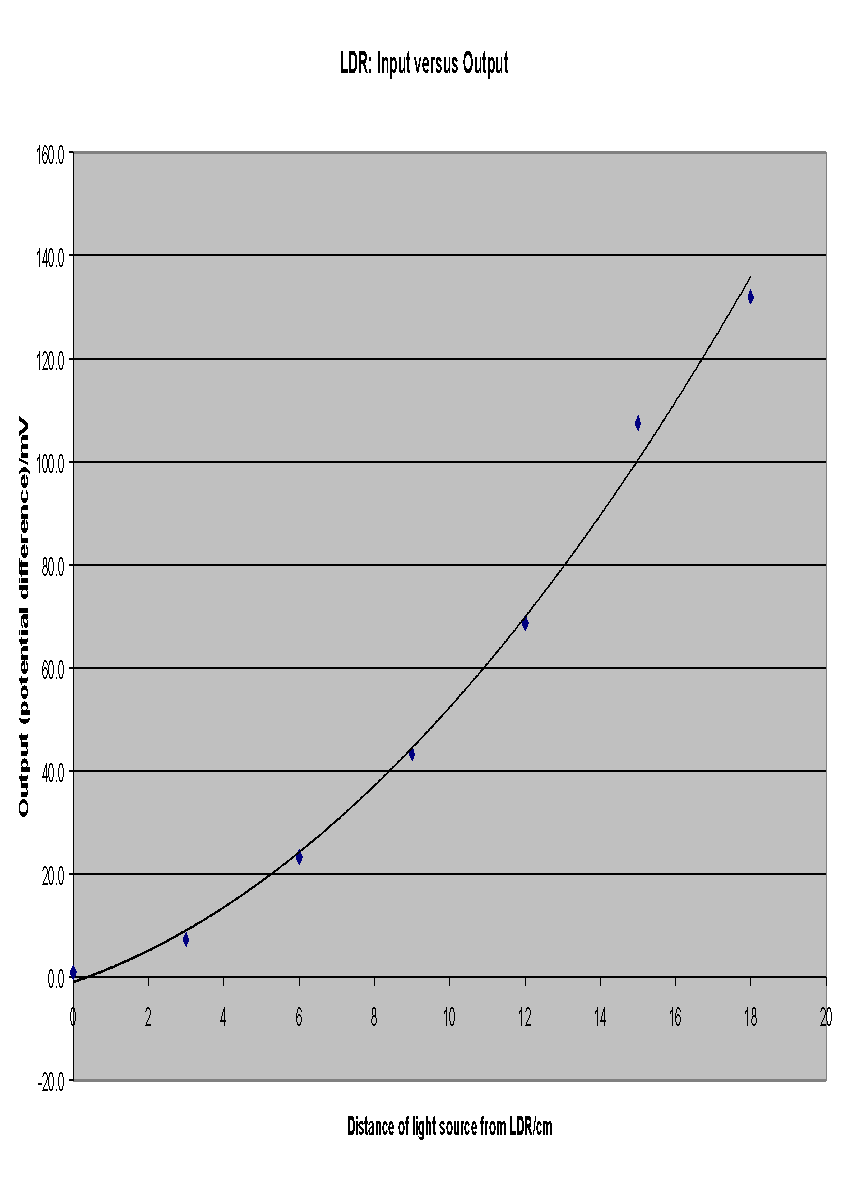 Graph 2 – Input (light) Versus Output (potential difference) of an LDR 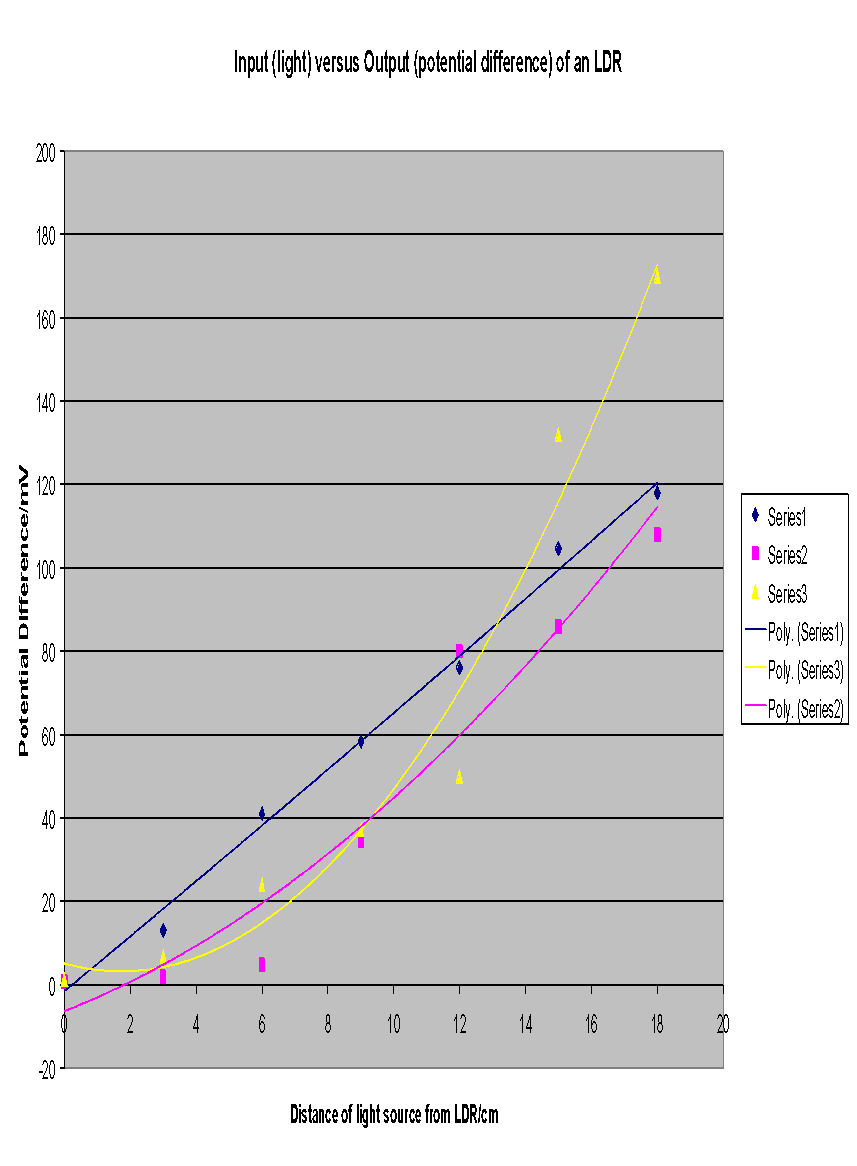 The curve was tested by randomly selecting an input value (placing the bulb 25cm away from the LDR) and the result was a potential difference of 59mV.

Despite the graph of the average output versus input seeming quite good, the individual values are very different from each other. For example, when the light source was 6cm away from the LDR the results were a potential difference of 41.1(UNITS?), 4.9 and 24.0. There is evidently a massive range of results. However, once the average is found the trendline fits the graph with only one slightly anomalous result: when the light source was 15cm away from the LDR the resulting potential difference seems slightly higher than expected. When one noted the individual results themselves it can be seen that on the third run the result at 15cm was considerably higher than expected and this result probably increased the average result. The fact that this individual result in particular was too high may indicate a shadow fell across the LDR from another person or perhaps the natural light became darker at this point.

It is interesting to note that my first run produced a straight line of results, the second run a slight curve and the third run a steeper curve. I believe this was because as time went on the resistor overheated moreheated up thus changing its resistive characteristics. This could have been combated by using a new resistor each time to ensure conditions stayed the same, or by cooling the resistor to maintain a constant temperature.

The results were not linear, they were slightly curved. I believe this is because as time went on the resistor overheated and this would have increased the resistance and it can be seen in the equation V = IR that an increase in resistance results in an increase in potential difference.

The LDR did not have a significant response time. The reading changed almost immediately as I moved the light source further away from it.

A factor that may have affected the reliability of my results was the light from other sources fluctuating and changing my results. For example, light from other bulbs in the room (being used in other people’s experiments) and also natural light from outside may change in intensity due to a shift in cloud cover or the change in position of the sun during the day. For this reason, it is extremely difficult to get reliable results when carrying out the experiment in the physics lab.

I believe the sensor is not fit for the purpose of measuring input against output because when I chose to measure the output against the input (bulb being 25cm away from the LDR) the result did not fit on the curve.

The amount of random variation suggests that the system is not fit for purpose.