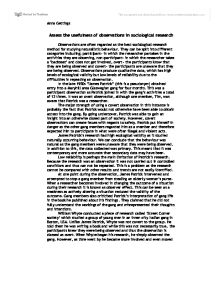 Assess the usefulness of observations in sociological research

Assess the usefulness of observations in sociological research Observations are often regarded as the best sociological research method for studying naturalistic behaviour. They can be split into different categories including; participant- in which the researcher partakes in the activities they are observing, non-participant- in which the researcher takes a 'backseat' and does not get involved, overt- the participants know that they are being observed and covert- the participants are unaware that they are being observed. Observations produce qualitative data, which has high levels of ecological validity but low levels of reliability due to the difficulties in repeating an observation. In the late 1950s "James Patrick" (this is a pseudonym) obtained entry into a Maryhill area Glaswegian gang for four months. This was a participant observation as Patrick joined in with the gang's activities a total of 12 times. It was an overt observation, although one member, Tim, was aware that Patrick was a researcher. The major strength of using a covert observation in this instance is probably the fact that Patrick would not otherwise have been able to obtain access into the gang. By going undercover, Patrick was able to gain an insight into an otherwise closed part of society. However, covert observations can create issues with regards to safety. ...read more.

This is when his research became a participant observation. Because Whyte's observation was overt, he was able to record data easily. This is a strength of overt observations as by recording data straight away important information is less likely to be forgotten or recorded inaccurately. An overt observation is also useful on a practical level. Whyte did not have to drastically alter his appearance etc, and so he saved time and money on this. However, overt observations can lead to subjectivity on the part of the subjects. Their behaviour may be liable to change if they are aware that they are being observed which would not therefore produce a fair representation of life in the gang. In addition to saving money, Whyte put himself in less danger by carrying out a covert observation. He stayed doing his research for 3 1/2 years, which was time consuming but did allow Whyte to get a very detailed insight into the life of his participants and therefore produce a valid piece of research. The main problem with Whyte's observation was to do with cultural differences between him and the group. He did not know much about some of their key interests, horse racing for example, and therefore could not participate properly. ...read more.

Eileen Barker studied the unification church or 'Moonies' for close to seven years. She used a range of sociological methods including overt, participant observations. Barker got to know the members as individuals, spent time in centres, went on courses and tried to live with them as much as possible. Barker developed a rapport with many of the Moonies, building quite a personal relationship with some of them. On the one hand, this can be seen as good for her research- the Moonies were more likely to trust her and welcome her into the community which would make conducting her research easier. Conversely, getting too close to the participants could result in Barker 'going native' and stop her from noticing and recording abnormalities or noteworthy events, which is a major concern when carrying out any research. The length of time which Barker spent undertaking this study was almost seven years. By spending such a long time observing the Unification Church, Barker would have been able to develop a good understanding of its inner workings, which bears well for a good piece of research. To conclude, it can be said that observations are useful for researching closed groups of society, providing detailed, qualitative research and capturing unexpected data about a topic. They do not, however, provide data that can be easily quantified which means they are not the ideal research method in all situations. ?? ?? ?? ?? Anna Gettings ...read more.