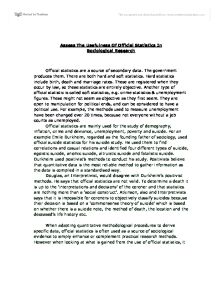 Assess The Usefulness Of Official Statistics In Sociological Research

Assess The Usefulness Of Official Statistics In

Official statistics are a source of secondary data. The government produces them. There are both hard and soft statistics. Hard statistics include birth, death and marriage rates. These are registered when they occur by law, so these statistics are entirely objective. Another type of official statistic is called soft statistics, e.g. crime statistics & unemployment figures. These might not seem as objective as they first seem. They are open to manipulation for political ends, and can be considered to have a political use. For example, the methods used to measure unemployment have been changed over 20 times, because not everyone without a job counts as unemployed.

Official statistics are mainly used for the study of demography, inflation, crime and deviance, unemployment, poverty and suicide. For an example Emile Durkheim, regarded as the founding father of sociology, used official suicide statistics for his suicide study. He used them to find correlations and casual relations and identified four different types of suicide, egoistic suicide, anomic suicide, altruistic suicide and fatalistic suicide. Durkheim used positivist’s methods to conduct his study. Positivists believe that quantitative data is the most reliable method to gather information as the data is compiled in a standardised way.

Douglas, an Interpretivist, would disagree with Durkheim’s positivist methods. He says that official statistics are not valid. To determine a death it is up to the ‘interpretations and decisions’ of the coroner and that statistics are nothing more than a ‘social construct’. Atkinson, also and Interpretivists says that it is impossible for coroners to objectively classify suicides because their decision is based on a ‘commonsense theory of suicide’ which is based on whether there is a suicide note, the method of death, the location and the deceased’s life history etc.

When adapting quantitative methodological procedures to derive specific data, official statistics is often used as a source of sociological evidence to simply enhance or complement practical research methods. However when looking at what is gained from the use of official statistics, it is important to recognize the limitations, which serve as a major downside to developing and attaining an unquestionable and flawless research. In addition, not all documents are easily available e.g. the Black Report (1980) which identified inequalities in healthcare, was released in very select circumstances.

Not all secondary data give us a valid, true and detailed picture of what is being measured, not just official statistics. Diaries/e-mails, it could be possible that the author lied or exaggerated about their activities Also, a document may not be reliable. Public documents are likely to be higher in terms of reliability than private documents like letters and personal documents such as diaries and e-mails data may be fake or unrepresentative.