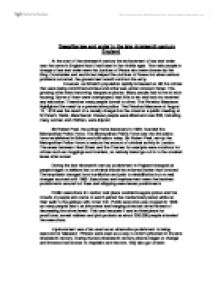 Describe law and order in the late nineteenth century England?

Describe law and order in the late nineteenth century England

At the start of the nineteenth century the enforcement of law and order was the same in England has it had been in the middle ages. The main people in charge of law and order were the Justices of Peace who were chosen by the King. Constables and watchmen helped the Justices of Peace but when serious problems occurred, the government would summon the army.                                         However, as Britain’s population rapidly increased so did the crimes that were being committed and law and order was under constant threat. The growing cities were becoming dangerous places. Many people had to live in slum housing. Some of them were unemployed, had little to eat and had not received any education. Therefore many people turned to crime. The Peterloo Massacre highlighted the need for a preventative police. The Peterloo Massacre of August 16, 1819 was the result of a cavalry charge into the crowd at a public meeting at St Peter's Fields, Manchester. Eleven people were killed and over 500, including many women and children, were injured.

During the late nineteenth century punishment in England changed as people began to believe that a criminal should be reformed rather than tortured. The emphasis changed from humiliation and pain to rehabilitation but no real charges accrued until 1980. Executions and imprisonment were the harshest punishments around but fines and whipping were lesser punishments.

Public executions in London took place outside Newgate prison and the crowds of people who came to watch pelted the condemned person while on their walk to the gallows with rotten fruit. Public execution was stopped in 1868 as many people saw it as inhumane and hanging attracted crime instead of decreasing the crime levels. This was because it was an ideal place for prostitutes, armed robbers and pick pockets as about 200,000 people attended the executions.

Imprisonment was often used as an alternative punishment to being executed or released.  Prisons were seen as a way to reform prisoners in the late nineteenth century. During the late nineteenth century prisons began to change and inmates had access to chaplains and doctors, they also got a basic education and they were allowed individual cells. The only problem was that the number of inmates increased dramatically so new prisons had to be built and criminals were not deterred from committing crimes so harsher punishments were bought back in during 1860.

The rich used fines in the late nineteenth century, which was seen as an advantage. This was a way of settling with the law for mainly violent behaviour.  The rich paying these fines could escape other forms of punishment for every offence except murder and treason.

Whipping was a rare punishment and was given for petty theft and they would be stripped down to their waist and whipped. This punishment was used on women and for commoners but not aristocrats.

English prisons had adopted two new prison regimes: the separate system and the silent system. The separate system was an American idea where prisoners were kept in solitary confinement at the start of their sentence. This promoted the theory that the criminal would reflect on what they had done and realise it was wrong and then be reformed by the chaplain. Criminals that had been reformed leaned things, for example gardening and woodwork. Many people opposed the separate system at the time as it sent the criminals that were in solitary confinement insane and if they were in a London prison they would be sent to Bethlehem Mental hospital. This system actually led to two case of suicide where the criminals had gone insane and couldn’t cope any more. The silent system forbids talking between the criminals under any circumstances. This was to stop criminals from passing on criminal tendencies to each other. The criminals were set monotonous task, for example the treadmill and turning the crank handle. This style of punishment was meant to stop people from repeating crimes.

In conclusion, law and order in the late nineteenth century needed a lot of improvement but had improved a lot. The punishments were harsher and cruel which stopped people from committing crimes until prisons were bought in and crimes again increased as criminals thought prisons where nicer than their own homes so didn’t mind being there.