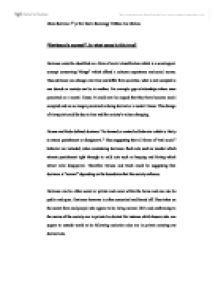 "Deviance is normal". In what sense is this true? Deviance could be identified as a form of social classification which is a sociological concept concerning "things" which offend a cultures expectance and social norms. Thus deviance can change over time and differ from societies, what is not accepted in one decade or society can be in another. For example guy relationships where once perceived as a mental illness. It could now be argued that they have become social accepted and are no longer perceived as being deviant or a mental illness. This change of viewpoint could be due to time and the society's values changing. Downs and Rode defined deviance "As banned or controlled behavior which is likely to attract punishment or disapproval." Thus suggesting that all forms of "anti social" behavior are included, when considering deviance. Such acts such as murder which attracts punishment right through to mild acts such as burping and farting which attract mild disapproval. Therefore Downs and Rock could be suggesting that deviance is "normal" depending on the boundaries that the society enforces. Deviance can be either secret or private and occur within the home and can also be public and open. Deviance however is often concealed and feared off. ...read more.

Secondary deviance concerns acts which have been publicly labeled as deviant and can affect ones status in society. By society labeling more acts as deviant they could be in danger as creating further deviance as ever act could become deviant. Thus labeling people as deviant publicly marks them out so that the individual who was ones a friend, family member is now perceived as a criminal and has a stigma attached to them. They have been given a negative status and are not allowed to interact with society and may feel rejected thus seeks comfort in committing more deviant acts as they have accepted the label that has been given to them. This is referred to as "self fulfilling prophecy" where the individual carries out deviant acts as it gives them some form of "social status" and they feel it is what is expected of them. The labeling theory can be criticized as it does not consider who makes the rules and does not take into account how they become applied. Further more it does not take into consideration were the stereotypes originate form (Soc in focus pg 480) In addition there is no evidence suggesting that labeling an individual does have an effect on their behavior and cause them to be deviant or whether it is the interaction with other so called "criminals" which cause further deviant behavior. ...read more.

For example epilepsy has been in all three categories in history it has been perceived as a mental illness, a form of social deviance (badness) and as it is know today a physical illness. Ideas of what is social Normal can be worked out from these three categories. All the theories appear to empathies the importance that conformity plays in whether deviance occurs or not. It could be argued that a society should give leeway and accept that deviance is normal and likely to occur, due to as all being individuals with different thoughts and feelings and roles to play within society. For society to advanced according to Durkeims perspective then we need to take individuals needs into consideration and perhaps be more understanding. This can be seen in Holland who accept deviance as normally and have a lower crime rate, whereas in South Africa who implement strict rules and punishments on levels of freedom they "sow higher levels of violence" (Giddens pg 153). Thus suggesting that societies who accept deviance as normal need not suffer breakdown and moral confusion as long as equality is still a key factor. In addition as long as society's members are allowed to fulfill their wishes and are not restricted and the needs of the wider community are not forgotten then deviance need not be seen as a threat and be considered as Normal. ...read more.