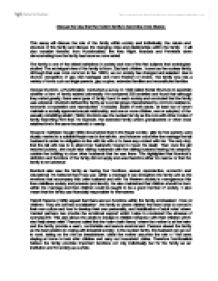 Discuss the view that the modern family is becoming more diverse This essay will discuss the role of the family within society and individually, the nature and structure of the family and discuss the changing roles and relationships within the family. It will also consider theories from Functionalists, the New Right, Marxists and Feminists when demonstrating how the family has become more varied. The family is one of the oldest institutions in society and one of the first subjects that sociologists studied. The archetypal view of the family is Mum, Dad and children, known as the nuclear family. Although that was more common in the 1950's, as our society has changed and adapted due to divorce, recognition of gay civil marriages and more freedom of choice, the family now has a variety of forms such as single parents, gay couples, extended families and reconstituted families. George Murdock, a Functionalist, conducted a survey in 1949 called Social Structure to ascertain whether a form of family existed universally. He compared 250 societies and found that although they varied greatly, there were types of family found in each society and concluded that the family was universal. Murdock defined the family as 'a social group characterised by common residence, economic co-operation and reproduction. ...read more.

After the Second World War, in an attempt to get women out of the workforce, the ideal family image was promoted, also known as the 'cereal packet' image by Edmund Leach (1967). However, as society has changed over the last decade, more women are taking on the 'dual burden' doing the housework and working in paid employment outside the home (Gershuny et al. 1994; Hochschild 1989; Sullivan 1997). Feminists feel that domestic labour is unpaid and that women are still being fooled by the societal image of the ideal family. Studies show that women within the family are the primary carer, for example, if a child is unwell it will be the woman who takes time off work to care for the child. Also, women tend to put their family first in terms of spending money whereas men will buy items for themselves. Delphy and Leonard (1992) believe that women make a much bigger contribution to family life yet receive fewer of the material benefits. Nevertheless, Feminists ignore the fact that women may actively choose to stay at home and bring up children, seeing it as a rewarding vocation and that this may have been a decision between husband and wife due to financial restrictions as it is still not possible for a man to have paid paternity leave. ...read more.

Similarly, there has been an increase in the amount of gay and lesbian families due to a wider acceptance and a change in law and the introduction of civil partnerships. Weeks, Heaphy and Donovan (1999) commented that there is more equality between partners because they do not have the same social and cultural assumptions that a heterosexual family has. For example, the division of labour and emotional support are shared unlike the nuclear family where women do the majority of the housework. Also, Fitzgerald (1999) showed that children raised in a gay or lesbian family were not affected; all that mattered was the relationship between the parents and the children. To conclude, some theorists such as Functionalists and the New Right feel that the family is collapsing with modern liberal thinking and a more open attitude towards gay and lesbian relationships, co-habitation and lone parent families. They suggest that the traditional family should be reinstated; however, Feminists see the change in the family as a welcome advance enabling freedom of choice for women as they can decide whether to live alone with children or cohabit with their partner before or ever entering into marriage. Ultimately, theorists generally believe that whether diversity within the family is desirable or not, changes within the family are a reflection on society today. Word count 2176 ?? ?? ?? ?? ...read more.