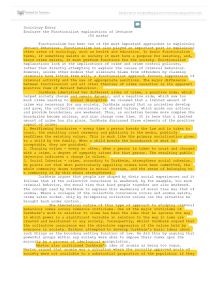 Evaluate the Functionalist explanations of Deviance.

Sociology Essay Evaluate the Functionalist explanations of Deviance (50 marks) Functionalism has been one of the most important approaches in explaining deviant behaviour. Functionalism has also played an important part in explaining other areas of sociology, such as health and education. In basic Functionalist terms, if something exists in society it must have a purpose for existing, and, since crime exists, it must perform functions for the society. Functionalist explanations look at the implications of crime and crime control policies, rather than directly attempting to explain the causes of criminal behaviour. However, unlike other models that eliminate blame from offenders by claiming criminals have little free will, a functionalist approach favours suppression of criminal activity and the use of appropriate sanctions. The major difference between functionalist and all other theories of crime causation is its apparent positive view of deviant behaviour. Durkheim identified two different sides of crime, a positive side, which helped society change and remain dynamic, and a negative side, which saw too much crime leading to social disruption. ...read more.

Only by re-imposing collective values can the situation be brought back under control. The theoretical nature of this type of approach to studying criminal behaviour comes across numerous criticisms. One of the major criticisms of Durkheim's work in relation to crime has been the idea that he ignores the way in which power is a significant variable in relation to the way in laws are created and maintained in any society. Consequently, whilst Durkheim argued that the collective conscience was the objective expression of the values held by everyone in society. Erikson attempted to develop Durkheim's basic ideas about such things as the boundary setting function of law. He did this by arguing that powerful groups within any society were able to impose their views upon the majority by a process of ideological manipulation. Merton also criticised Durkheim's idea of anomie as being too vague. Merton argued that anomie was a situation where the socially approved goals of society were not available to a substantial proportion of the population if they followed socially approved means of obtaining these goals. ...read more.

therefore theories based on these statistics are not especially valid. The overall functionalist theory on crime and deviance is criticised by Marxists. They claim that the criminal justice system is built in favour of the ruling class and that they use institutions like mass media and the educational system to divert people's attention away from their situation. Thinking synoptically, the educational system is also said to be an ideological state apparatus, whose main function is to reproduce class inequalities, therefore there will always be a communities, such as the working class, which are stereotyped as criminal. This helps the ruling class by maintaining their ideology of working class crime. Crime too plays a part in transmitting ruling class ideology as it diverts attention away from the exploitative nature of capitalism and focuses attention of the frightening nature of certain criminal groups in society. Which justifies heavy policing of working class areas and stop searches on young people, whereas the functionalist approach does not provide an explanation for this. Functionalists also have the view that socialisation is a positive process that never fails. Nevertheless, if this were the case then crime and deviance would not be the social problems that they are. ...read more.

This essay shows excellent understanding of Durkheim and Merton, and the Functionalist perspective generally. The grade could be improved by using other theoretical perspectives to evaluate - such as Interpretivism or Feminism, which would make a more critical essay. The essay title was very specific when it asked the candidate to 'evaluate' the theory, but the essay spends much time describing than it needs to.