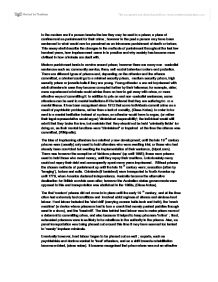 Punishment and Prisons. This essay shall describe the changes in the methods of punishment throughout the last few hundred years, how imprisonment came in to practice and why society has become more civilised in how criminals are dealt with.

In the modern era if a person breaks the law they may be sent to a prison; a place of confinement as punishment for their crime; however in the past a person may have been sentenced to what would now be perceived as an inhumane punishment of death or torture. This essay shall describe the changes in the methods of punishment throughout the last few hundred years, how imprisonment came in to practice and why society has become more civilised in how criminals are dealt with. Modern punishment tends to revolve around prison; however there are many non-custodial sentences such as: community service, fines, anti-social behaviour orders and probation. There are different types of prisons and, depending on the offender and the offence committed, a criminal could go to a minimal security prison, medium security prison, high security prison or juvenile halls if they are young. Young offenders are not imprisoned with adult offenders in case they become corrupted further by their influence; for example, older, more experienced criminals could advise them on how to get away with crime, or more effective ways of committing it. In addition to prison and non-custodial sentences, some offenders can be sent to mental institutions if it is believed that they are suffering from a mental illness. ...read more.

As the welfare state came in to force (1948), the government were taking on more responsibilities and a state-run criminal justice system was developed, (Class Notes). Remand centres were introduced and hard labour was abolished under the Criminal Justice Act (1948). There was also the idea of delivering a short, sharp, shock to young offenders in order to deter them from re-offending. The short, sharp, shock typically involved sending a young offender to a (rough and unpleasant) borstal for two to three months to 'scare' them out of a life of crime. However this regime eventually proved unsuccessful; the first few weeks of imprisonment are usually the worst, but after this time individuals start to 'get used to' it`s unpleasant conditions, and even begin to make friends on the inside. Therefore the 'short', sharp shock was too long, and briefer sentences of a few weeks may well have proved more effective (as well as less expensive). In 1965 the death penalty was finally abolished; a clear marker that society was becoming more rational and civilised. Punishment of the body is now a thing of the past, and sentences of torture and death seem incredibly in-humane by today`s standards. ...read more.

Prisons managed by private companies (such as G4S, Kalyx and Serco) are still subject to the same routine inspections as are public sector prisons. It has been argued that privately run prisons are more efficient, however critics of this initiative state that there have been some major problems with privately managed prisons; for example Ashfield prison for young offenders which opened in 1999 had prisoners withdrawn in 2003 by the Youth Justice board, due to repeated riots and reports of poor management, (Wikipedia). In conclusion prison comes to dominant thinking in punishment due to the sociological changes that have taken place throughout history. It is now 'morally' unacceptable to punish people in physically painful ways, such as death and torture, and everyone, including criminals, have human rights which must be respected. In addition we now know much more about crime, who commits it and why; this, along with society's technological advances, and the introduction of the police force means that more offenders can be caught and punished, and so 'bodily' punishments like death seem a rather unnecessary deterrent. Moreover, rehabilitation means that some offenders can be reformed and reintegrated in to society, (which further reduces the need for a death penalty). ...read more.