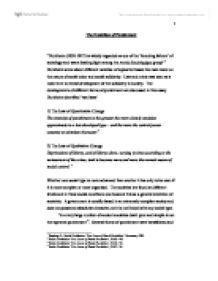 The Evolution of Punishment.

The Evolution of Punishment "Durkheim (1858-1917) is widely regarded as one of the 'founding fathers' of sociology and was a leading light among the Ann�e Sociologique group" 1 Durkheim wrote about different varieties of topics but based his main issue on the nature of social order and social solidarity. Law and crime was seen as a main term to reveal development of the solidarity in society. The developments of different forms of punishment are discussed in this essay. Durkheim identified 'two laws' 1) The Law of Quantitative Change The intensity of punishment is the greater the more closely societies approximate to a less developed type - and the more the central power assumes an absolute character.2 2) The Law of Qualitative Change Deprivations of liberty, and of liberty alone, varying in time according to the seriousness of the crime, tend to become more and more the normal means of social control. 3 Whether one social type is more advanced than another it has only to be seen if it is more complex or more organised. The societies are found at different levels and in these social conditions one looks at this as a general evolution of societies. A government is usually based in an extremely complex society and does not posses an absolutist character, as it is not linked with any social type. ...read more.

'While religious forms of criminality decline, it is inevitable that punishment on the average should become weaker'12. Religious criminality held a more complete atmosphere towards the punishments than human criminality. 'Human morality progressively sheds it's primitively confessionals character'13. The whole overall linguistic features established through the human and religious criminality was that 'human criminality develops and religious criminality recedes'14. But a mutual influence must be noted that, 'for as human criminality gains ground, it reacts in its turn on religious criminality and, so to speak, assimilates it'15 The sentiments of the ancient societies and modern societies differ by 'the manner in which collective sentiments reacted against crime changed because these sentiments changed'16. This transformation took place from changes in societies through the ancient societies and modern societies. Durkheim believed that the collective changes in milder punishment did not indicate a lack of social control through criminal law just that the changes had there own effects of the society. 'If the punishment is milder today than formerly it is not because former penal institutions, while remaining intact, have little by little lost their rigour; but rather they have been replaced by different institutions'17 Durkheim used the R�gles de la Methode Sociologique and the Ezra book as evidence to support his arguments with other sources of legal documentations. Broken windows is possibly one of the most influential and widely cited articles. ...read more.

Each crime has a punishment depending on the circumstances of the crime. Concepts of moral economy were developed as a means of analysing and explaining crowd actions. From person being a threat to society the 'diffusion in which other places is inter-connected with the initial event'22. The approaches to law, crime and morality were of great deal of interest to criminologists and radical socio-legal scholars. "Engels did not bring their ideas on law together in a developed theory: hence the interpretation of their views on law remains controversial" 23. Penology 'A term which covers the application of clinical, managerial or social scientific methods or expertise to the disciplined study and evaluation of penal institutions, especially prisons'24. Penology attempts to reform rationalize penal conditions and regimes so as to maximize their corrective effectiveness. It is more practically oriented, there is no sense that nothing works. Social Control 'A poorly defined concept which has been used to describe all means through which conformity might be achieved - from infant socialization to incarceration. It has been employed in various guises within interactionism, labelling, control theory, feminism, critical criminology and post-structuralism'25. Penality 'A term introduced from the French p�nalit� and owing its current salience primarily to the influence of Foucault'26. The use of the term penality is a strike on conscious of normal penal theory. The endless changeability and the intense political controversy and social analysis have become a high field of criminological enquiry. Crime is not a self-evident and unitary concept. It is constitution and diverse historically relative to the contest. ...read more.