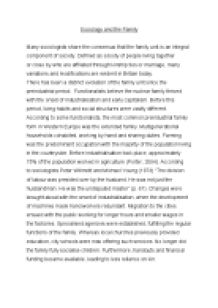 Sociology and the Family

﻿Sociology and the Family Many sociologists share the consensus that the family unit is an integral component of society. Defined as a body of people living together or close by who are affiliated through kinship ties or marriage, many variations and modifications are evident in Britain today. There has been a distinct evolution of the family unit since the preindustrial period. Functionalists believe the nuclear family thrived with the onset of industrialisation and early capitalism. Before this period, living habits and social structures were vastly different. According to some functionalists, the most common preindustrial family form in Western Europe was the extended family. Multigenerational households cohabited, working by hand and sharing duties. Farming was the predominant occupation with the majority of the population living in the countryside. Before industrialisation took place, approximately 75% of the population worked in agriculture (Porter, 2004). According to sociologists Peter Willmott and Michael Young (1973) ?The division of labour was presided over by the husband. He was not just the husbandman. He was the undisputed master? (p. 67). Changes were brought about with the onset of industrialisation, when the development of machines made hand workers redundant. Migration to the cities ensued with the public working for longer hours and smaller wages in the factories. ...read more.

estimated that 40% of cohabiting couples will eventually progress into marriage; however 26% of these marriages result in divorce. Conflicts, modernity, and the ease of divorce contribute towards increasing divorce statistics. Secularisation in society has diminished the religious belief which prohibits the act of divorce. Furthermore, as a result of relaxations of British divorce laws, it has become more widespread and accessible for persons seeking divorce. ?Empty Shell? marriages and physical separation also account for marriage breakdown. Spouses continue living together, although their marriage exists in name only. Married couples choose to sleep in separate rooms, with some even going as far as living separately. Marriages are changing, as are attitudes. Society is not as patriarchal as it once was. Only 1.8% of women were economically inactive as of February 2012, as opposed 2.4% of men (?Labour Market Statistics,? 2012). It is now deemed acceptable for the female to assume the role of ?breadwinner.? Single mothers who govern the household are also not uncommon, nor are lesbian households. Matriarchalism is proving to be a significant component of contemporary society. The contemporary British family is breaking away from gender specific stereotypes. Willmott and Young perceive the modern family to be mainly conjugal, sharing household tasks and responsibilities. ...read more.

According to Gernsheim, the impact of multiculturalism may help to reduce intolerance between ethnic groups. Furthermore, studies show that ethnic children adapt well to British conduct. British Asian children show westernised qualities whilst away from the family, yet at home they conform to Asian ideology (Ballard, n.d.). In 2009, a study revealed that 77% of British Asians strongly identified with Britain, as opposed to just 55% of their white counterparts. The same study showed that 67% of British Asians were happy to live in mixed neighbourhoods (?The Gallup Coexist Index,? 2009). The evolution of the family shows no signs of ceasing. Culture continues to diverse, as does the family. Nuclear families developed, flourished, and dwindled. Romanticised functionalist ideals do not conform to modern standards ? other ideals are becoming the norm. No longer are people expected to marry; cohabitation, civil partnership and single lifestyle are convenient alternatives. Western women are no longer suppressed, allowing for more symmetrical and less patriarchal households and families. A person can bore as many children as they desire, whether they are in matrimony or not, and without being socially segregated. Prejudice and racism is under no circumstance acceptable due to the array of race, religion and sexual inclination in Britain. Sociologists accept the impact of ever changing families and cultures, and society has no choice but to embrace it. Whether one favours such change, it is an undeniable fact of modernity. 2,213 words. ...read more.