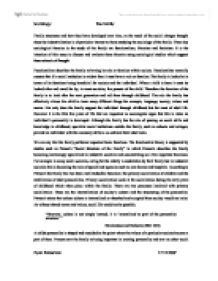 Family structures and how they have developed over time, as the result of the social changes brought about by industrialisation is of particular interest to those studying the sociology of the family. Three key sociological theories in the study of the family are functionalism, Marxism and feminism. It is the intention of this essay to discuss and evaluate these theories using sociological studies which support these schools of thought. Functionalism describes the family as having its role or function within society. Functionalists normally assume that if a social institution is evident then it must have a role or function. The family is looked at in terms of its functions being beneficial for society and the individual. When a child is born it must be looked after and cared for by, in most societies, the parents of the child. Therefore the function of the family is to look after the next generation and aid them through childhood. The role the family has effectively allows the child to learn many different things for example, language, society, values and norms. Not only does the family support the individual through childhood but for most of adult life. ...read more.

(Harolambos and Holborn 2004:471) The Marxist approach to the family also has strengths and weaknesses. Unfortunately Engels theory was based upon early unreliable anthropological evidence and his view upon early society no longer seems to stand ground within society today. Although his theory on the origins of sexual equality have led to the Marxist approach of the monogamous family. The third sociological theory (another conflict theory) is feminism. The feminist perspective focuses on a number of social, cultural and political movements and theories that are concerned with gender inequalities and prejudice against women. Feminism can also be seen to be an ideology based on the equality of both sexes. The feminist approach of the family tends to emphasise the negative effects of the family upon women. Anne Oakley's studies "The Sociology of Housework" and the "Housewife" depicts the feminist tradition of viewing women in a subordinate social role to men. Anne Oakley looked at conjugal roles within the family and the divide of housework between men and women. Oakley analysed the research of Willmott and Young (1973) in which the researchers asked only one question to a husband, "Do you help with the housework?" ...read more.

It also tells us that feminism is not gender specific and highlights the issues of both sexes. The feminist perspective shows the effects of male dominance within the home in relation to domestic labour. In conclusion the contributions made by the functionalist, Marxist and feminist perspectives to sociology have brought us to an understanding in how the family works as a social institution today. They highlight the importance of several social factors which have come to create specific conditions within the family. For example the effect of the economy on the family. The studies of the family also shows us the family's role within society and how it has come to effect both sexes. Important figures in sociology such as Talcott Parsons , Friedrich Engels and Anne Oakley have been important in how we understand the family in contemporary society and in pre-industrial society and the contributions to sociology they have Reference List Haralambos and Holborn (2004) ASCHNCSociologyBSK/Family 11.8.07 ASCHNCSociology/Oakley HW/SK 13.8.07 made will be vital to us also in the future as to how we understand the family. ?? ?? ?? ?? Sociology The Family Ryan Robertson 17.12.2007 ...read more.