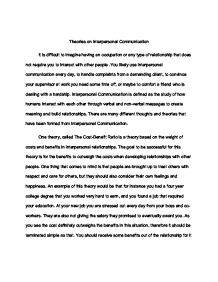 Another theory in Interpersonal Communication is the Social Penetration Theory. This theory claims that you must interact with the other person, and the other should do the same or the relationship will be eventually diminished. When in a relationship you have different levels of talk. You might have a relationship with someone at college that you just discuss school topics and that's it. You could have another partner that you discuss more personal topics as you grow closer to each other. The main goal for The Social Penetration Theory to be successful is to just simply communicate. Another theory is The Johari Window which represents the idea of self disclosure. The Johari Window is broken down into four regions or areas. Each area contains information based on your feelings. ...read more.

Most Dysfunctional Relationships start out with verbal abuse. It usually starts out periodically and then erupts to more outbursts. One example could be that a boyfriend starts shouting at his girlfriend once a week for not doing things he wants her to do. After he sees he can get by with doing this he decides to shout more. The whole time this is happening, emotional feelings of sadness are building up in the girlfriend and the relationship ends up dysfunctional. The Cost-Benefit Theory is a good place to be used to see if it is actually worth being in the relationship. Interpersonal Communication is something each of us does every day, by using and educating ourselves with the theories involved we can be a happier person and learn to understand ourselves as well as the person we are communicating to. ...read more.