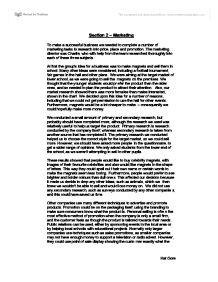 Section 2 - Marketing To make a successful business we needed to complete a number of marketing tasks to research into price, place and promotion. The marketing director was Charlie, who with help from the team researched thoroughly into each of these three subjects. At first the group's idea for a business was to make magnets and sell them in school. Many other ideas were considered, including a football tournament, fair games in the hall and other plans. We were aiming at the target market of lower school, as we were going to sell the magnets on the premises. We thought that the younger students would prefer the product than the older ones, and so needed to plan the product to attract their attention. Also, our market research showed there was more females than males interested, shown in the chart. We decided upon this idea for a number of reasons, including that we could not get permission to use the hall for other events. Furthermore, magnets would be a lot cheaper to make - consequently we could hopefully make more money. We conducted a small amount of primary and secondary research, but probably should have completed more, although the research we used was relatively useful to help us target the product. Primary research is research conducted by the company itself, whereas secondary research is taken from another source that has completed it. ...read more.

The corridors were the best place because people are constantly walking past there, and seeing that our business exists. We also had posters around where we were selling to make the stall look slightly exciting, and so people didn't have to ask too many questions if they wanted to buy something. The information included what the product was, price, materials and where you could buy them. These posters needed to be bright and bold with an easy to read font, so that they attracted maximum attention and made the business seem more interesting. Our method of promotion linked to our target market, as the colours, shapes and lettering were made to attract the younger students. We decided not to speak in assemblies or to go around form times as it was hard to gain the permission and nobody particularly wanted to do it. We could have improved our business by doing this, but it may have not appealed to our target market that tends to switch off in assemblies and our market research showed that most people did not like this idea, shown in the graph. Although everyone would have heard about our business this way, we rejected the idea which now we think was a mistake. This method could have been more effective, so we probably should have considered it for a longer period of time, and maybe visited at least one assembly to gain more attention for our business. ...read more.

The other material involved was the magnetic strip, with each magnet having a 10p piece stuck to the back. This made a whole magnet cost 17p to make. We didn't need to consider labour costs, as we were making the product ourselves. So then we had to decide what percentage mark up we would have on our product, keeping the price still quite low but enough to make a small profit. We eventually decided on 50p per magnet, which all people asked in our research said they would be willing to pay, with offers for the letter magnets for names. This meant we make 33p on every magnet sold. We didn't have any competition in the business, because no one else was making magnets, so we didn't have to take other prices into account when decided our price. But if new competitors came into the market, we would have our cost a little lower than them, as our market research concluded that most people would prefer that, shown in the chart below. However, we did have to think about our company's income. We only had a �50 loan from the school, and needed to use some of this for materials and advertising - and so the products had to be at a price where we could break even relatively quickly. As we made the products ourselves and sold them ourselves, tax costs did not come into our business. The three price plans we needed to consider were creaming, penetrating and skimming. ?? ?? ?? ?? Kat Gore ...read more.

****
The writer has covered many important areas and has combined good theoretical knowledge with practical application.