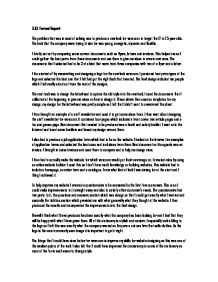 3.1.2 Formal Report The problem that was in need of solving was to produce a new look for wow.com to target the 17 to 25 year olds. The look that the company were trying to aim for was young, energetic, dynamic and flexible. I firstly set out by comparing some current documents such as flyers, letters and invoices. This helped me as I could gather the best parts from these documents and use them to give me ideas to create new ones. The documents that I selected had to be 3 of a kind that were from three companies with two of a flyer and a letter. I the started off by researching and designing a logo for the new look wow.com. ...read more.

It contained four pages which included a front cover, two article pages and a fun and games page. Next document that needed to be produced was a heath and safety booklet. I went onto the Internet and found some booklets and based my design around them. I also had to produce a job application form which had to be on the website. I looked on the Internet for examples of application forms and selected the best ones and took ideas from them. Next document on the agenda was an invoice. I brought in some invoices and used them to compare and to help me design mine. I then had to actually make the website for which wow.com would put their new range on. ...read more.

Overall I think what I have produced has been exactly what the company has been looking for and I feel that they will be happy with what I have given them. All of the stationary is stylish and modern; I especially took a liking to the logo as I felt this was exactly what the company wanted as they are a uni-sex firm that sells clothes. As the logo is the most commonly seen image it is important to get it right. The things that I could have done better for wow.com is improve my skills for website designing as this was one of the weaker points of the task. I also felt that I could have improved the consistency in some of the stationary as most of the fonts each seem to change style. ?? ?? ?? ?? ...read more.