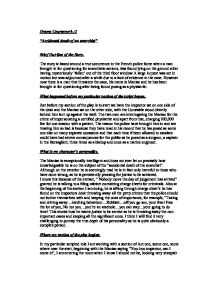 Accidental death of an anarchist

Drama Coursework :2 "Accidental death of an anarchist" Brief Out-line of the Story. The story is based around a true occurrence in the French police force when a man brought in for questioning for anarchistic actions, was found lying on the ground after having mysteriously 'fallen' out of the third floor window A large inquest was set in motion but was adjourned after a while due to a lack of evidence in the case. However now there is a man that threatens the case, his name is Maniac and he has been brought in for questioning after being found posing as a physiatrist. What happened before my particular section of the script began. Just before my section of the play is to start we have the inspector sat on one side of the desk and the Maniac sat on the other side, with the Constable stood directly behind him lent up against the wall. The two men are interrogating the Maniac for the crime of impersonating a certified physiatrist and apart from that, charging 200,000 lire for one session with a patient. The reason the police have brought him in and are treating him so bad is because they have read in his record that he has posed as some one else on many separate occasions and that each time if been allowed to escalate could have had severe ...read more.

When I realise that he is not in the room I sit down on the table and put my feet up and start rummaging through the inspectors private files. After a while the phone rings and I answer it, although I do act professionally at the beginning of the phone call I quickly progress into very childish and silly behaviour, for example I begin an interpretation of Bertozzo where I blow raspberries down the phone from a distance. When the phone call is finished I resume my search through the charge sheets. What difficulties I encountered while doing this play. My first difficulty was the learning of my lines as my usual technique would be to act it out with the lines in front of me but the majority of my lines are said when I am sat down talking on the phone so I could not align my words with any actions as I don't move. Secondly I found it more difficult than usual to get into my character. This being probably because the sheer complexity of my character was to difficult to depict in one simple scene. The way I will perform as my character. My voice will be normal, but in parts it will be slightly higher, and have a more sarcastic tone. ...read more.

I found the role of the Maniac to be very difficult to relate to as he is mildly mad, or rather not of sound mind and judgement and could not see myself as the Maniac. What I found to be most problematic was the learning of the lines, what I would usually do is to act out my lines as I learnt them, however with this play I found it close to impossible to achieve this as the majority of my play was to performed whilst sitting talking on the phone. So on the whole the only real problem I faced was script learning and I believe I should work on my memory skills for my next play. For my next script I intend to do a comedy piece with Rob Cannel, a fellow drama student who shares a love of comical pieces. We are yet to decide upon the actual piece as there are many good plays out there but we are looking into the possibility of doing "Bouncers" or "waiting for godot" both of which we are told would suit our personalities perfectly. This experience has taught me that although my skills lie within comedy, when faced with a play with a more serious genre I can meet the challenge more positively and hopefully do the script justice. ...read more.