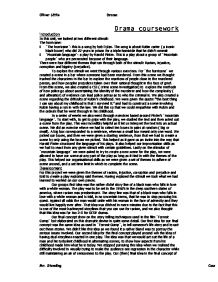 In this unit, we looked at two different stimuli:The hurricane: `The hurricane`- this is a song by bob Dylan. The song is about Rubin carter ( a iconic black boxer)

Drama coursework introduction In this unit, we looked at two different stimuli: The hurricane: * `The hurricane`- this is a song by bob Dylan. The song is about Rubin carter ( a iconic black boxer) who did 22 years in prison for a triple-homicide that he didn't commit * `Mountain language`- a play by Harold Pinter. This is a play about a group of `Mountain people` who are persecuted because of their language. There were four different themes that ran through both of the stimuli: Racism, injustice, corruption and bigotry (prejudice). To explore the stimuli we went through various exercises. For `the hurricane` we created a scene in a bar where someone had been murdered. From this scene we thought-tracked the characters in the bar to explore the reactions of people close to the murdered person, and how peoples prejudices taken over their rational thought in the face of grief. From this scene, we also created a CSI ( crime scene investigation) to explore the methods of how police go about ascertaining the identity of the murderer and how the complexity ( and alteration) of evidence can lead police astray as to who the criminal is. We also created a scene regarding the difficulty of Rubin's childhood. ...read more.

The play was to be set in the 1950's in the deep southern states of america, where racism was predominant. The story line was that of a black man who falls in love with a white woman and is told, in no uncertain terms, that he was to stop pursuing his quest. Against all odds the man would unite with his woman in the face of adversity and they would live happily ever after. That idea was ditched in mere minutes due to the fact that this is one of the most hackneyed storylines that you can use for racism, and we also thought that this idea was far too 2-D for GCSE drama. Our final concept drew on the story telling techniques used in the film `Forrest Gump` but elaborated on this dramatic devise in quite some detail. Our first idea for our final concept was the same idea as used in `Forrest Gump`, to tell someone's life story and to ract out these stories. We didn't like this idea as we found it a rather bland way to portray the serious issues involved. Our second idea for the final concept played around wih the idea of having dual storylines enacted in one play. ...read more.

This left us with a whole bunch of scenes, and no main character (the group member that had quit was the main character of the book world) that left us in a very bad situation. We only had two weeks left, and no play. We used some of the existing scenes and altered them slightly to create our final final idea. This is the story of an abusive husband and father and the way he, unintentionally, moulds his daughters image of men. This play explores the idea of a prejudice against men and the well known injustice of always believing the younger sibling. There is an awesome scene in this play to, where the husband has abused his wife to the point that she dreams of therapy. In this scene there is a key theme running through it; the word crazy. This word symbolises the way she feels and the way her husband thinks of her. The wife cannot take the abuse anymore and decides to take her own life. when the family discover the corpse, there is a dramatic scene where the daughter reveals her true feelings for her father whilst threatening to kill him with her mothers suicide weapon, she surprises everyone when she ends up pointing toward her head and killing herself to be with her dead mother, and overall, away from her father. ?? ?? ?? ?? Oliver Little Drama 10V Mr. Standing Coursework ...read more.