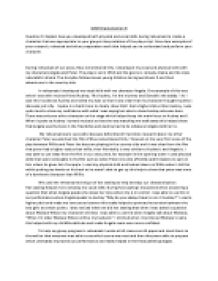 Section B essay. During rehearsals of our piece, Blue remembered hills, I developed my vocal and physical skills with my characters Angela and Peter.

﻿GCSE Drama Section B Question 5: Explain how you developed both physical and vocal skills during rehearsals to create a character that was appropriate to your groups interpretation of the play script. Give clear examples of your research, rehearsal and other preparation work that helped you to understand and perform your character. During rehearsals of our piece, Blue remembered hills, I developed my vocal and physical skills with my characters Angela and Peter. The play is set in 1943 and the genre is comedy drama and the style naturalistic drama. The storyline follows seven young children during world war 2 and their adventures in the country side. In rehearsals I developed my vocal skills with my character Angela. One example of this was when I was with my best friend Audrey, ?No Audrey, I?m the mummy and Donald?s the daddy.? As I said this I looked at Audrey and rolled my eyes so that it was clear that my character thought Audrey?s idea was just silly. ...read more.

I was able to use ideas from the film in our own piece, for example in the opening scene I used physical skills that were noticeable in the film such as when Peter sits onto off willie and threatens to spit on him unless he gives him the apple. I used my physical skills and looked down on Willie when I did this whilst putting my hands on his back so he wasn?t able to get up this help to show that peter was more of a dominant character than Willie. We used the rehearsal technique of hot seating to help develop our characterization. Hot-seating helped me to develop my vocal skills. During hot-seating I discovered when answering a question that when Angela speaks she raises her tone when she is in control. I was able to use this in our performance when Angela speaks to Audrey ?Why do you always have to ruin it Audrey?? I used a higher pitch and made my tone sound sterner this really helped to portray the tension between the two girls at certain points. ...read more.

This helped me with my physical skills as I was able to use a pervious memory of my friends and running around a field pretending to be soldiers in the war. I was able to adapt this memory to my character peter and apply this to the opening scene when willie and peter are also pretending to be pilots in the war, I ran around the stage being a plane gunning people to the floor until I too was shot and then I fell down. I also used the emotional memory technique to develop my vocal skills, I used the memory of when I was running around the field and adapted it to portray excitement. I used vocal skills when iw as making the plane noises I used a high pitch and went from a fast to slow paced breath to show that I was beginning to get tired I over emphasized breathing in and out like a child would to show my immaturity. Research and rehearsal techniques helped my group to develop our characterization and our overall performance. ...read more.