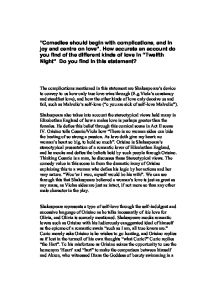 &amp;#147;Comedies should begin with complications, end in joy and centre on love&amp;#148;. How accurate an account do you find of the different kinds of love in &amp;#147;Twelfth Night&amp;#148; Do you find in this statement?

"Comedies should begin with complications, end in joy and centre on love". How accurate an account do you find of the different kinds of love in "Twelfth Night" Do you find in this statement? The complications mentioned in this statement are Shakespeare's device to convey to us how only true love wins through (E.g.Viola's constancy and steadfast love), and how the other kinds of love only deceive us and fail, such as Malvolio's self-love ("o you are sick of self-love Malvolio"). Shakespeare also takes into account the stereotypical views held many in Elizabethan England of how a males love is perhaps greater than the females. He defies this belief through this comical scene in Act II scene IV. Orisino tells Cesario/Viola how "There is no woman sides can bide the beating of so strong a passion. As love doth give my heart: no woman's heart so big, to hold so much". Orisino is Shakespeare's stereotypical presentation of a romantic lover of Elizabethan England, and he mocks and defies the beliefs held by such people through Orisino. Thinking Cesario is a man, he discusses these Stereotypical views. The comedy value in this scene in from the dramatic irony of Orisino explaining this to a woman who defies his logic by her actions and her very nature. "Woo'er I woo, myself would be his wife". ...read more.

"If music be the food of love, play on. Give me excess of it, that surfeiting the appetite may sicken and so die" In this extract, Shakespeare shows love as a type of sustenance by making the comparison between love and food. Through the complications of the deranged love triangles, we can see that Shakepeare identifies unreciprocated love. Olivia states how loving is good, but receiving it is better " reason thus with reason fetta. Shakespeare plays with this idea, contrasting that idea with the reality of the play. Orisino feels more obligated to win Olivias heart the more she refuses "That I owe Olivia". Olivias attraction toward Cesario increases the more he casts aside her affection "O what a deal of scorn looks beautiful in the contempt and anger of his lip". Shakespeare how unreciprocated can love grow the more the love is not returned. There are many other types of love demonstrated in this account, such as self-love. Shakespeare shows how taking the love of ones self to an extreme can separate you from others. Shakespeare conveys this to the audience through the arrogance, pomposity and the superiority complex of Malvolio. For instance, Olivia asked Malvolio his opinion of Feste the clown at the start of the play Malvolio loves himself so much that he believes he is better than those around him, looking sneeringly down through his nose at everyone who he believes is less of a man than he. ...read more.

she does this for Orisino, when he states he will not accept another refusal from Olivia. Viola states "sooth but you must" which puts Orisinos self-indulgent ideal of romantic love in a realistic perspective). Violas constancy brings about the joy for the many at the end, her true love for Orisino prevailing through the time and complications, that causing Orisino to fall in true love with Viola for these values he had not being able to appreciate whilst under the impression she was a man, but now he loves her for the right reasons. Olivias love for Cesario may have been for Sebastian the whole time, as I think Viola personified traits of his character in her alter ego (eg???) to keep the pained memory of her (apparently) departed brother alive. This may be why Shakespeare mysteriously made the characters unable to distinguish the siblings from each other. In the end, only true love prevails through all the hardships that we will surely encounter along the way, even if they are not as extreme as the ridiculous ones presented by Shakespeare. As Festes departing song portrays, time goes on and we are as powerless to prevent it as we are "the wind and rain cometh every day". The statement identifies many types of love Shakespeare was concerned with whilst writing "Twelfth Night", but negates the dark undertone of the ending, of how outsiders are spurned from the joy at the end. ...read more.