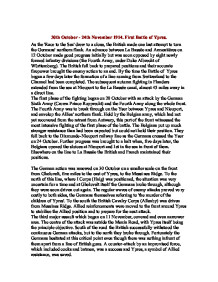 30th October - 24th November 1914. First Battle of Ypres. As the 'Race to the Sea' drew to a close, the British made one last attempt to turn the Germans' northern flank. An advance between La Bass�e and Armenti�res on 12 October made good progress initially but was soon opposed by eight newly formed infantry divisions (the Fourth Army, under Duke Albrecht of W�rttemberg). The British fell back to prepared positions and their accurate firepower brought the enemy action to an end. By the time the Battle of Ypres began a few days later the formation of a line running from Switzerland to the Channel had been completed. The subsequent autumn fighting in Flanders extended from the sea at Nieuport to the La Bass�e canal, almost 45 miles away in a direct line. ...read more.

The Belgians put up much stronger resistance than had been expected but could not hold their position. They fell back to the Dixmunde-Nieuport railway line as the Germans crossed the Yser on 24 October. Further progress was brought to a halt when, five days later, the Belgians opened the sluices at Nieuport and let in the sea in front of them. Elsewhere on the line to La Bass�e the British and French maintained their positions. The German action was renewed on 30 October on a smaller scale on the front from Gheluvelt, five miles to the east of Ypres, to the Messines Ridge. To the north of this line, where I Corps (Haig) was positioned, the situation was very uncertain for a time and at Gheluvelt itself the Germans broke through, although they were soon driven out again. ...read more.

The centre of the attack was astride the Menin Road, with Ypres itself being the principle objective. South of the road the British successfully withstood the continuous German attacks, but to the north they broke through. Fortunately the Germans hesitated at this critical point even though there was nothing infront of them apart from a line of British guns. A counter-attack by an improvised force, which included cooks and batmen, was a success and Ypres, a symbol of Allied resistance, was saved. Although the crisis was over, fighting continued until 24 November, the last day of the Battle of Ypres. Casualties were severe on both sides with the loss of irreplaceable professional manpower. The British suffered losses of 50,000 men killed of wounded; the French and Germans casualties were much higher. As the fighting subsided, open combat was replaced by the trench, which dominated the Western Front until 1918. ...read more.