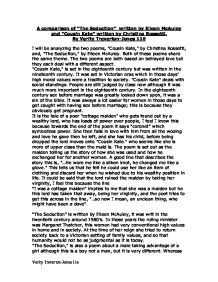 A comparison of The Seduction written by Eileen McAuley and Cousin Kate written by Christina Rossetti.

A comparison of "The Seduction" written by Eileen McAuley and "Cousin Kate" written by Christina Rossetti. By Verity Treverton-Jones 11E I will be analyzing the two poems, "Cousin Kate," by Christina Rossetti, and, "The Seduction," by Eileen McAuley. Both of these poems share the same theme. The two poems are both based on betrayed love but they each deal with a different aspect. "Cousin Kate," is set in the eighteenth century but was written in the nineteenth century. It was set in Victorian eras which in those days' high moral values were a tradition to society. "Cousin Kate" deals with social standings. People are still judged by class now although it was much more important in the eighteenth century. In the eighteenth century sex before marriage was greatly looked down upon, it was a sin of the bible. It was always a lot easier for women in those days to get caught with having sex before marriage; this is because they obviously get pregnant. It is the tale of a poor "cottage maiden" who gets found out by a wealthy lord, who has loads of power over people, I feel I know this because towards the end of the poem it says "coronet" which symbolizes power. She then falls in love with him from all the wooing and love he gave then he left, and she has his child, before being dropped the lord moves onto "Cousin Kate." who seems like she is more of upper class than the maid is. The poem is set out as the maiden telling us the story of how she was used and how he exchanged her for another woman. A good line that describes the story this is, "...He wore me like a silken knot, he changed me like a glove." This tells us that he felt he could use her like an item of clothing and discard her when he wished due to his wealthy position in life. ...read more.

While the maiden 'howls in dust' "the girl sobbed in the cool locked darkness of her room" as well she feels betrayed by the promise of it all. She never thought that her experience would be the way that it turned out to be. She had dreamt of a perfect romances like that were promised in her magazines. "And she ripped up all her my guy and her Jackie photo-comics .../ bright paper, like confetti, strewn" this more girl got promised many things by these girl comics, this is an ironic marriage simile, confetti symbolizes weddings and the promises made of love a future. Her dreams to be happy ended, "on the carpet". She is starting in the 9th stanza to realize what she has lost "cheated by the promise of it all" she has bitter regrets; she learns not to trust any man again. In the last stanza it says "and better now to turn away, move away, fade away" this tells me that the writer put that there to show that she is moving away from society, they are strong resentful words. I also noticed that there is a sentence going back to the past reminding herself about the good old days, when she was young .It is the howl of the 12th and 13th stanza. It in the 12th stanza it says "picture" I feel that the poet used that so that it shows the post and her sense of innocence and childhood. I find that in the 11th stanza, I believe a mini oxymoron could have been used it is of a "s" sound, for example "stammer", and, "softly", and, "sickened" and then lastly also a repeated word of "stupid stupid" I find that this "s" sounds is because she now realizes that she was hiding be hide the truth, and she starts to face reality. Just as the girl the maiden also felt betrayed because she had pictured her love, life with the lord to last eternally but it did not. ...read more.

They both describe the social stigma surrounding teenage pregnancies and unmarried mothers. They both show that despite the situation, it is always the woman who ends up with the blame. The narrator in 'Cousin Kate' was labeled an 'outcast thing' and the girl in 'The Seduction' was whispered about, even though it was the boy who had taken advantage of her. Even though a hundred and fifty years had passed since 'Cousin Kate' had been written, people still had the same ideas about teenage/single mothers. The attitude I pick up from these poems is that it is looked down on for women to become single mothers, and it is wrong for women to have sex with a lot of people, but for a man it is acceptable, and no label or shame is placed upon him. I have found 'The Seduction' easier to understand, mainly because the language is simpler and the images described are more modern. However I prefer the imagery used in 'Cousin Kate' because I feel it is more original and interesting. I prefer phrases such as "his plaything and his love" and "he wore me like a silken knot" to his "eyes as blue as iodine" and "green as a septic wound". On the other hand, I think the symbolism used in 'The Seduction' is very effective, i.e. the confetti and the high white shoes. I feel that the main reason I prefer 'The Seduction' is it's easier to relate to for my age group. It is very hard to imagine what it would be like to be singled out by a great lord and then to be left for her cousin and having the lords baby on the way. I find it much easier to relate to 'The Seduction' as It could be easier to understand how it must feel to have a 'one night stand' and then become pregnant as I myself am a teenage, the other poem is written by a women who left by a lord and to modern day that wouldn't happen. Verity Treverton-Jones 11e ...read more.